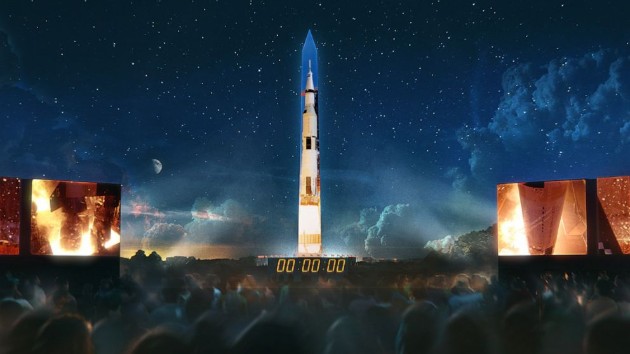 (WASHINGTON) — Houston, we have a celebration. To honor the 50th anniversary of Apollo 11 moon landing, the Smithsonian’s National Air and Space Museum later this month will project the image of a 363-foot Saturn V rocket onto the Washington Monument, while a 17-minute show, Apollo 50: Go for the Moon detailing the mission, plays on screens nearby.The goal of the show, according to a representative at the Smithsonian, is to have the audience understand the scope and complexity of the entire Apollo program and to experience the dramatic launch of the Saturn V rocket that carried all of the Apollo missions to the Moon.“Our identity as Americans is defined in part by the historic act of landing humans on the moon and returning them safely to the Earth,” said Ellen Stofan, John and Adrienne Mars director of the museum in a press release. “The Washington Monument is a symbol of our collective national achievements and what we can and will achieve in the future. It took 400,000 people from across the 50 states to make Apollo a reality. This program celebrates them, and we hope it inspires generations too young to have experienced Apollo firsthand to define their own moonshot.”The Smithsonian has partnered with both the U.S. Department of the Interior and 59 Productions, a company that specializes in, “design for stage and live events, architectural projection-mapping to exhibition design, virtual reality experiences and technical consultancy,” to put on the show.The projection will include both Smithsonian and NASA archived footage along with storytelling of the first moon landing. Everything seen on the Washington Monument will be custom digital artwork, and a 40-foot-wide recreation of the famous Kennedy Space Center countdown clock will also be shown.The display, however, required congressional approval. H.J. Res. 60 was introduced in the House on June 10, asking the Secretary of the Interior to authorize, “one-time arrangements for displays on the National Mall and the Washington Monument during the period beginning on July 16, 2019 and ending on July 20, 2019.” After passing through both the House and Senate unanimously, President Donald Trump signed the resolution, on July 5 following his “Salute to America”.“Almost 50 years ago, the Apollo 11 mission captivated the world as two American astronauts were the first to step foot on the moon, forever changing space exploration,” said Interior Secretary David Bernhardt in the press release. “Through House Joint Resolution 60, Congress requested a one-time series of arrangements for displays on the National Mall and the Washington Monument to showcase this incredible achievement in our nation’s history, and we’re pleased to partner with the National Air and Space Museum so all can relive the moment.”The show will be free at the Washington Monument and will take place on July 19 and 20, at 9:30 p.m., 10:30 p.m., and 11:30 p.m.On July 16, 17 and 18, the projection will simply show the Saturn V rocket on the Washington Monument from 9:30-11:30 p.m.Other events to commemorate the first moon landing include an Apollo 50 festival on the National Mall, Apollo at the Park showcasing 15 replica statues of Neil Armstrong’s spacesuit in ballparks across the country, and the Race to the Moon a 50-day virtual race on the app Strava.Copyright © 2019, ABC Radio. All rights reserved.