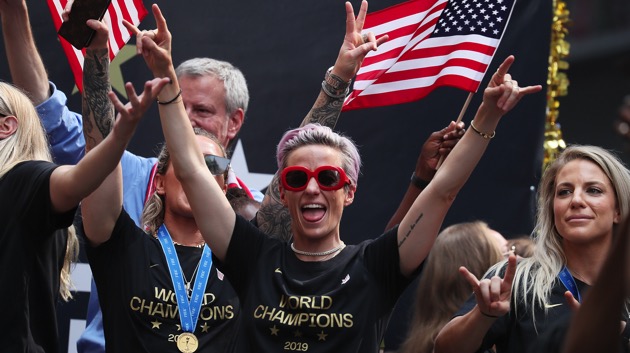 (NEW YORK) — The soccer stars of the U.S. Women’s National Team joined the ranks of Charles Lindbergh, then-Gen. Dwight Eisenhower, astronauts, world leaders, a pope and war veterans as they were honored with a ticker-tape parade in New York City’s famed Canyon of Heroes Wednesday morning.The excitement of the vivacious team was matched by the thousands of spectators who crowded lower Manhattan, cheering the floats as they headed to City Hall, where the players were awarded keys to the city.”We have pink hair and purple hair. We have tattoos and dreadlocks. We got white girls and black girls and everything in between, straight girls and gay girls,” co-captain Megan Rapinoe said in a speech to adulation from the crowds and her teammates.

USWNT star Megan Rapinoe praises teammates: "We have pink hair and purple hair. We have tattoos and dreadlocks. We got white girls and black girls and everything in between, straight girls and gay girls." https://t.co/j1h0yXktcK #USWNTParade pic.twitter.com/14Ijn4OVl0

Cheers for the now-four-time World Cup winners were peppered with regular calls for equal pay, serving as a reminder of the battle that the players are facing off the field for equal pay and treatment to their male counterparts.At the City Hall ceremony, both New York City Mayor Bill de Blasio and his wife Chirlane McCray led chants of “U.S.A., equal pay!””Equality of women must be guaranteed in this nation and let’s honor them by doing it. Let’s honor them by showing it,” de Blasio said.Part of the speech by U.S. Soccer Federation president Carlos Cordeiro was drowned out with chants of “equal pay” as he discussed the issue.”We hear you. We believe in you, and we’re committed to doing right by you,” Cordeiro said.”U.S. Soccer has invested more in women’s soccer than any country in the world, and we will continue to invest more in women’s soccer than any country in the world and we will continue to encourage others, including those at FIFA, to do the same,” he said.In her speech, Rapinoe defended Cordeiro after he faced boos from the crowd, saying, “I think he’s with us, I think he’s on the right side of things, I think he’s gonna make things right.”She wryly added, “We look forward to holding those feet to the fire.”During the parade, some of the players were seen holding a handmade poster reading, “Parades are cool, equal pay is cooler.”Democratic Rep. Joe Manchin introduced a bill Tuesday that would stop any federal funds from being used in the 2026 World Cup — which will be held jointly in the U.S., Canada and Mexico — unless female and male players in the U.S. receive equal pay.”I received a letter from Coach Izzo-Brown highlighting her worries that women on the WVU Women’s Soccer Team could one day make the U.S. women’s team and not get paid the same as the men’s team. That’s just plain wrong,” Manchin said in a statement released Tuesday.”The clear unequitable pay between the U.S. men’s and women’s soccer teams is unacceptable and I’m glad the U.S. Women’s Soccer Team latest victory is causing public outcry. They are the best in the world and deserve to be paid accordingly,” he said.One of the fans in the crowd, who identified herself as Riley, told ABC station WABC that “it’s just really good to see them and how they keep on fighting and keep on winning.””On or off the field, they fight for what they believe in,” she said.The women received some support on social media from another politician, with former President Barack Obama posting a picture of himself with a team jersey on Twitter Wednesday morning.”Proud to rep America’s best team! Congrats @USWNT and thanks for being such a strong inspiration for women and girls—and everybody—all across the country,” Obama wrote.

Proud to rep America’s best team! Congrats @USWNT and thanks for being such a strong inspiration for women and girls—and everybody—all across the country. pic.twitter.com/9Gp6UTZhEE

Wednesday’s celebration marked New York City’s 207th ticker tape parade, and the last time that one was held came after this same team’s last World Cup win in 2015. With that parade, the team became the first women’s team to be celebrated with a ticker-tape parade.The women now join the ranks of sports teams that have been honored multiple times, including the New York Yankees, who have had nine such parades, and the New York Mets, who have had three. Five Olympic teams have had parades in the Canyon of Heroes, a man-made section of lower Manhattan stretching from Bowling Green Park to City Hall Park. The Women’s National Team will now be tied with the New York Giants with two parades a piece.But in her speech, Rapinoe looked beyond sports. She called on everyone — those present and not present, who “agrees and doesn’t agree” — to “step outside of yourselves, be more, be better,” and “make your community better.””This is my charge to everyone: we have to be better,” she said. “We have to love more, hate less. We gotta listen more and talk less. We gotta know that this is everybody’s responsibility.”