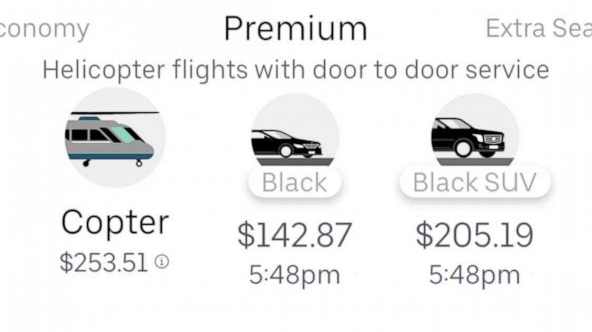 (NEW YORK) — Uber is going to great heights to get around New York City rush hour traffic.The rideshare company launched its Uber Copter service on Tuesday, offering rides from lower Manhattan to John F. Kennedy International Airport (JFK) on weekday afternoons — for its Platinum and Diamond Uber Rewards members.”We’re excited to announce the first step toward building the future of urban air mobility and transforming urban aviation: Uber Copter,” the company said in a press release. “Uber Copter is our first aerial ridesharing option.”To hail a helicopter, riders must be in a designated zone, in which “Copter” appears as an option within the app. Chopper rides to JFK can be booked up to five days in advance. On the way home, you book the rides after your flight lands. Currently the chopper service is only available on iOS, so Android users are out of luck.During a test run of Uber Copter during the late afternoon on Wednesday, an ABC Producer found two differently-priced options to JFK from the designated zone.From Balthazar, a restaurant in SoHo, to JFK the trip was priced at $216.57. From Brookfield Place near the World Trade Center, the trip to JFK came out to $253.51.The helicopter flights are operated by HeliFlite, a direct air carrier the Silicon Valley company has partnered with. HeliFlite has earned ARGUS Platinum and Wyvern Wingman safety ratings, according to the Uber press release.The company also said it was implementing a Safety Management System (SMS) for all future Uber Air services including Uber Copter, using data to analyze trends and hazard reporting.