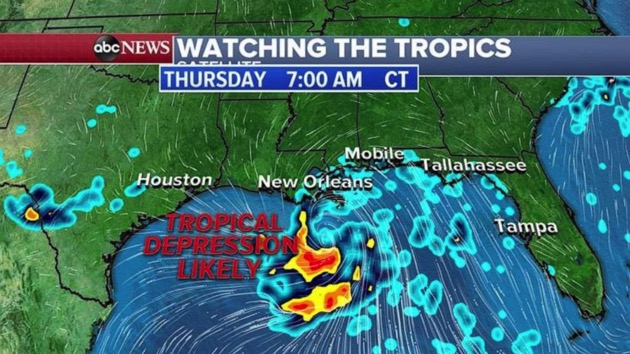 (NEW YORK) — A tropical system developing in the Gulf of Mexico could bring the first threat of this year’s hurricane season to the United States.New Orleans was already under a severe thunderstorm warning and flash flood warning Wednesday morning. City officials warned of street flooding.The city was also under a tornado warning.Tropical storm, hurricane and storm surge watches may be in effect later in the day along the Gulf Coast from Louisiana to the upper Texas coast, officials with the National Hurricane Center (NHC) said.”We all need to take this very, very seriously,” Louisiana Gov. John Bel Edwards said at a news conference Wednesday morning.

Tornado warning reissued for Orleans and Jefferson Parishes until 9am! Take shelter immediately if you are near this storm! It has a history of producing waterspouts! #lawx pic.twitter.com/rHHRBJQYBB

The system is expected to develop into tropical depression late Wednesday or Thursday and slowly move west over the Gulf of Mexico, according to the NHC.The tropical depression may strengthen into Tropical Storm Barry.Regardless of how intense the storm may become, heavy rain is expected from the Florida Panhandle to the upper Texas coast and is forecast to extend inland into Louisiana, eastern Texas and the the lower Mississippi Valley.Edwards warned that Louisiana could see as much as 10 to 15 inches of rain over a 24 hour period.”We’re not sure yet of the exact track of the storm, or the strength of the potential tropical system once it makes landfall. However we’re confident that there will be widespread heavy rainfall and coastal flooding,” he said. “We could have heavy rain not just over the weekend but into next week.”Copyright © 2019, ABC Radio. All rights reserved.

Mom dying of ovarian cancer shares what she wants women to know about the deadly disease
Jada Pinkett Smith celebrates 50th birthday on ‘Red Table Talk’; ABC to adapt Baratunde Thurston’s ‘How to Be Black’
Ray J responds to rumors of a second sex tape with Kim Kardashian: “This ain’t cool”
Biden agrees with France’s Macron that sub snub could have been handled better
Is It Time To Go All-In On The Raiders?
Billy Porter reveals why he wants to say “thank you” to Elizabeth Taylor