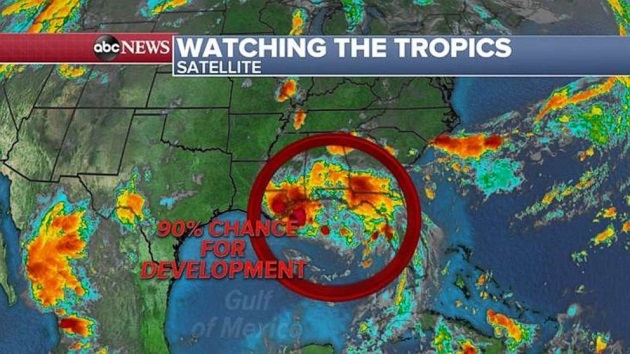 (NEW YORK) — A tropical system developing in the Gulf of Mexico could bring the first threat to the United States this hurricane season.The National Hurricane Center is giving the disturbance a 90% chance of forming into a tropical depression later Wednesday or Thursday in the northern Gulf.By Thursday morning, it should be a tropical depression, with its center just south of New Orleans, in the central Gulf.The depression will move east by Friday morning, and could even become Tropical Storm Barry.Most reliable models show the system moving on shore somewhere in central Louisiana.As this tropical system moves inland, it will spread heavy rainfall into Louisiana, eastern Texas, western Mississippi, Arkansas and even parts of Oklahoma. Flooding is expected in these areas.The National Hurricane Center will begin to issue tropical storm or storm surge watches for the Gulf coast states during the day Wednesday.Copyright © 2019, ABC Radio. All rights reserved.