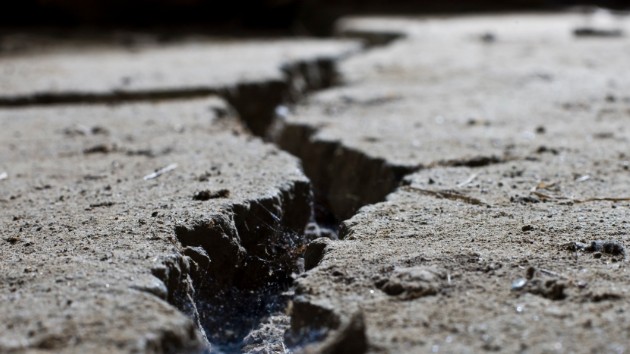 (PAHRUMP, Nev.) — Officials in Nevada are investigating whether a man crushed to death by his own SUV may have died as a result of last Thursday’s earthquake centered in Southern California. A 56-year-old man from Pahrump, Nevada, was found underneath his vehicle after going missing for six days, according to the Nye County Sheriff’s Office. The man was apparently working under the vehicle when the earthquake struck last Thursday morning at about 10:30 a.m. local time. “Based on preliminary timing and circumstances at the scene, the Nye County Sheriff’s investigation reveals that this death may be the result of the vehicle falling off the jacks on July 4th during the earthquake,” the sheriff’s office said in a release.The man, who has not been named by authorities pending notification of family, was last seen at a gas station in town on July 3. When authorities arrived at the man’s home he was found under the Jeep.”The vehicle that the male was pinned under had been jacked up safely and based on the positioning of the body and the tools found at the scene, the male appeared to be working on the vehicle at the time of his death,” Nye County Sheriff’s Office Sgt. Adam Tippets said.No one was believed to have been seriously injured in last week’s 6.4 magnitude earthquake.Pahrump is in an extremely rural part of Nevada, about 120 miles from Ridgecrest, California, where the earthquake’s epicenter was located. The quake could be felt as far as way as Las Vegas, however, about 60 miles east of Pahrump.Authorities said an investigation is ongoing and further information would be released once it is finished.The earthquake turned out to be a foreshock ahead of Friday evening’s 7.1 magnitude quake. No one was seriously injured in that quake.The 6.4 earthquake was the largest the area had felt in 20 years, topped by the quake one day later that equaled the 7.1 magnitude Hector Mines earthquake in 1999. Copyright © 2019, ABC Radio. All rights reserved.