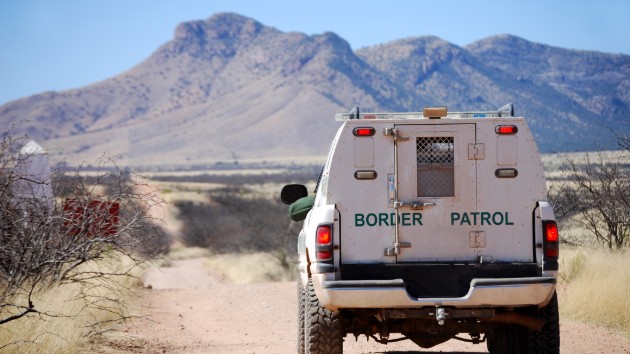 (WASHINGTON) — The number of undocumented migrants being stopped at the U.S.-Mexico border has dropped dramatically in just weeks, remaining at historically high levels but also representing the first decline in several months. The drop follows an agreement by the Mexican government with President Donald Trump to deploy its own security forces to crack down on asylum seekers.The Homeland Security Department announced on Tuesday that 104,344 people either tried to cross illegally or approached a port of entry without proper documentation — a 28% drop compared to May when 144,278 people tried to cross. Almost all of the undocumented migrants arrive at the border seeking to claim asylum as allowed under U.S. law.Acting Homeland Security Secretary Kevin McAleenan told reporters late last month that he had seen early indications of the drop after Mexico agreed to deploy its National Guard. Mexico announced the move after Trump threatened to impose tariffs on Mexican imports unless it did more to prevent the travelers from reaching the U.S. border.”In terms of when we’re going to know if these efforts in Mexico are making an impact, I think these three weeks are demonstrating they are already,” McAleenan said at the time.McAleenan also credited the administration’s policy of forcing asylum seekers to wait in Mexico while their case winds its way thru U.S. immigration courts. At least 13,000 people have been told to remain in Mexico under the new protocols. The administration has argued this approach will deter families hoping to live and work inside the United States while their asylum cases are processed.Human rights groups have sounded the alarms on both the Mexican government’s use of force to stop migrant travel, as well as insisting that families who do reach the border are returned to Mexico to wait out their asylum cases. These groups say migrant families are facing massive shortages of shelter, food and water, and are exposed to serious crimes — including kidnapping, sexual assault and violence.While a remarkable decline, the latest numbers of border apprehensions and people stopped at ports is still historically high. Last June, the number was only 43,180 compared to this year’s 104,344. Overall, U.S. Border Patrol apprehended roughly 690,000 people since Oct. 1.Last week, an agency watchdog determined that U.S. Border Patrol facilities in several areas faced such massive overcrowding and unsanitary conditions that one manager called his holding facility a “ticking time bomb” as adults were forced into standing-room-only cells for weeks at a time. It also warned that children under the age of 7 were being held past the 72-hour limit without access to showers and sleeping on the floor.”The current migration flow and the resulting humanitarian crisis are rapidly overwhelming the ability of the Federal Government to respond,” states a July 1 letter included in the watchdog report by the Inspector General’s office at the Department of Homeland Security.Copyright © 2019, ABC Radio. All rights reserved.

COVID-19 live updates: More than 10,000 new deaths reported in US in one week
These vaccine mandates are already in place to attend school in the US
What to expect as FDA advisory panel debates Pfizer COVID booster shots
COVID-19 live updates: US reports highest daily death toll in nearly 7 months
Apprehensions at the southern border surpass 200,000 in August
Democratic drama as House advances Biden’s agenda: What’s in the draft reconciliation bill?