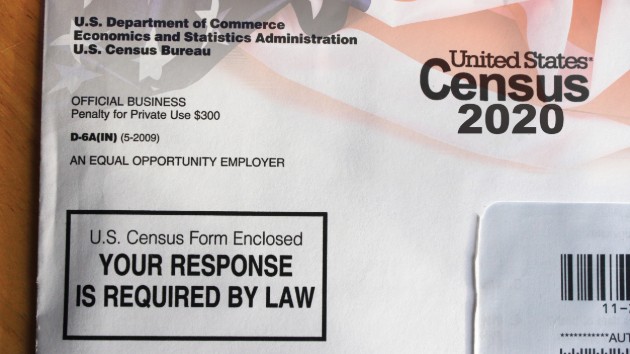 (NEW YORK) — The federal judge overseeing the census case in the Southern District of New York has blocked the government’s motion to withdraw its team of lawyers who had been working on the case previously.Judge Jesse Furman’s order doesn’t block the new team of lawyers from entering the case, but he says the Department of Justice must provide “satisfactory reasons” for its surprise decision to withdraw the previous team.”Defendants provide no reasons, let alone “satisfactory reasons,” for the substitution of counsel,” Furman wrote in the ruling. “And as to the second factor, Defendants’ mere “expect[ation] that withdrawal of current counsel will [not] cause any disruption” is not good enough, particularly given the circumstances of this case.”Notably, the judge puts the government’s own arguments prior to the Supreme Court’s ruling against them, where it had repeatedly called for expediting the case in order to resolve the citizenship question dispute and get the census printed.”If anything, that urgency — and the need for efficient judicial proceedings — has only grown since that time,” Furman said.The DOJ declined to comment on this decision.President Donald Trump issued his reaction on Twitter on Tuesday night.

So now the Obama appointed judge on the Census case (Are you a Citizen of the United States?) won’t let the Justice Department use the lawyers that it wants to use. Could this be a first?

In a statement, the ACLU said, “The Justice Department owes the public and the courts an explanation for its unprecedented substitution of the entire legal team that has been working on this case.”The Justice Department’s announcement about the changing legal team heightened speculation that there have been concerns among members of the original legal team tasked with carrying out Trump’s demands to include the citizenship question, despite a recent Supreme Court ruling blocking the move. When Trump last week demanded that the department reverse course after it conceded the 2020 census would not include the citizenship question, the government’s lawyers struggled to explain a path forward when pressed by a federal judge.Last week, the Commerce Department announced that the census had started printing without inclusion of the question, and the administration has stressed that printing process would continue through the ongoing legal fight. Officials have suggested that if the government is able to prevail in court that the question could be added as some sort of addendum.Copyright © 2019, ABC Radio. All rights reserved.