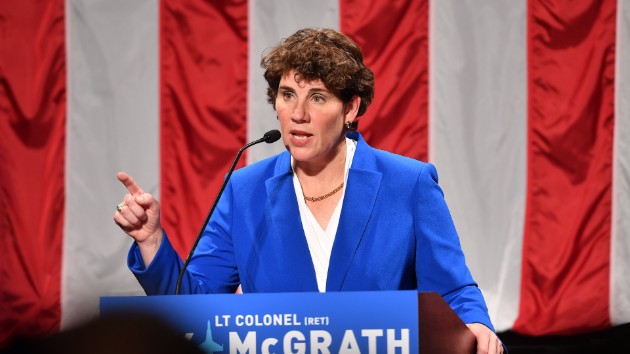 (WASHINGTON) — Amy McGrath, a former fighter pilot who unsuccessfully ran for Congress in 2018, launched a Senate bid on Tuesday, hoping to be the Democratic nominee to take on Majority Leader Mitch McConnell in the 2020 election.”(McConnell) has bit by bit, year by year, turned Washington into something we all despise, where dysfunction and chaos are political weapons, where budgets and health care and the Supreme Court are held hostage, a place where ideals go to die,” McGrath said in the video announcing her candidacy. “I’m running for Senate because it shouldn’t be like this.” A retired U.S. Marine Corps lieutenant colonel, McGrath made a name for herself as one of the many female veterans running for Congress for the first time in 2018. She lost her race against Rep. Andy Barr, the incumbent for Kentucky’s 6th Congressional District, but this cycle, she wants to unseat one of the biggest names in politics.In her announcement video, McGrath, a born and raised Kentuckian, tells the story of when she wrote to her senator at 13 years old, during a time when women weren’t allowed to have combat roles in the military, to tell him she wanted to be a fighter pilot, and that “women should be able to do that.”Her senator — McConnell — never responded, she said.McGrath briefly shared this story in the video launching her 2018 House campaign, too, but this announcement video also highlights other constituents who wrote letters to McConnell and said they heard nothing back.Pat Roberts, a steel worker, who worked at a mill that shut down, losing his job. Ann Young, a diabetic “who fears losing her health care and coverage for her pre-existing conditions.” Jimmy Guess, a coal miner who had to retire after getting black lung disease. Kendall Russell, a student who needs federal loans to go to college, but doesn’t know how she’ll pay them off.”Everything that’s wrong in Washington had to start someplace,” McGrath says. “Well, it started with this man, who was elected a lifetime ago.”Asked about McGrath’s announcement on Capitol Hill Tuesday afternoon, McConnell said he enjoys campaigning and that it would be a “spirited race.””I look forward to the contest and laying out our differences to the people of Kentucky,” he said.McConnell’s campaign tweeted out a response to McGrath’s announcement, writing, “Welcome to the race, Amy,” with a video focusing on McGrath’s more liberal policy stances on issues like immigration, health care and reproductive rights, that ends by asserting she’s “too liberal for Kentucky.”The video also features McGrath’s words along with photos of prominent Democratic politicians, like congressional leaders Chuck Schumer and Nancy Pelosi, Rep. Alexandria Ocasio-Cortez and Sens. Bernie Sanders and Elizabeth Warren, two of the many Democratic candidates vying to take on President Donald Trump in the 2020 election.In response to the McConnell campaign’s video, Mark Nickolas, McGrath’s campaign manager, told ABC News, “Before Mitch McConnell uses a hacked up recording to attack Amy, he should explain … why he colluded with Governor Bevin in Kentucky to take health care away from hundreds of thousands of Kentuckians. We can’t drain the swamp if the swamp turtle sits on top of the drain.”Appearing on MSNBC Tuesday morning, McGrath recognized McConnell as a “very formidable” politician, but said that in 2016, Kentuckians voted for Trump because the president “promised to bring back jobs” and lower drug prices.”The things that Kentuckians voted for Trump for are not being done,” McGrath said. “He’s not able to get it done because of Sen. McConnell.”On Twitter late Tuesday, Trump asked, “Why would Kentucky ever think of giving up the most powerful position in Congress, the Senate Majority Leader, for a freshman SEnator with little power in what will hopefully be the minority party. We need Mitch in the Senate to Keep America Great!!”McGrath will have to win the Democratic nomination to have the opportunity to face McConnell. Health care professional Steven Cox and mental health counselor Jimmy Ausbrooks are also seeking the nomination.However, on day one of her campaign, she’s already snagged a congressional endorsement. Presidential candidate Massachusetts Rep. Seth Moulton, a Marine Corps combat veteran of the Iraq War, tweeted that “she’s the right person to beat Mitch McConnell.”And two senators running for president tweeted support for McGrath’s campaign.Massachusetts’ Elizabeth Warren said in a tweet that McGrath “is a real fighter for working families in Kentucky,” adding, “Go Amy!” Minnesota’s Amy Klobuchar wrote, “From one Amy to another, we need you here!”Copyright © 2019, ABC Radio. All rights reserved.

What is Title 42? Amid backlash, Biden administration defends use of Trump-era order to expel migrants
Trump return to White House ‘would be a disaster’ for US intelligence: Former DHS whistleblower
Pfizer CEO says it’s possible to distribute both boosters and primary doses
Pelosi may delay vote on Senate bipartisan infrastructure bill
The push for electric vehicles may be killing sedans for good: Experts
Iowa Republican Sen. Chuck Grassley, 88, running for reelection