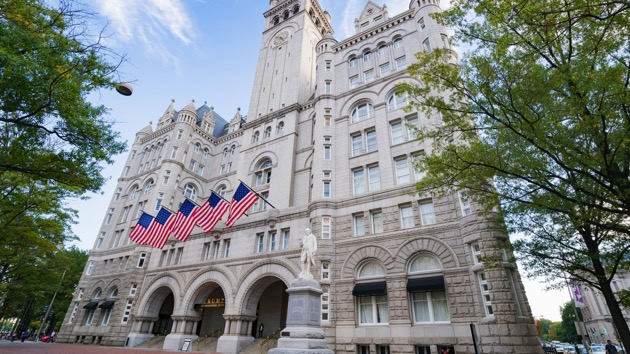 (WASHINGTON) — A federal appeals court on Wednesday handed President Donald Trump a legal victory, dismissing a lawsuit accusing the president of illegally profiting from his Trump International Hotel in Washington, D.C., by accepting money from foreign governments.The attorneys general from Maryland and the District of Columbia had brought the case, arguing that the president violated a constitutional clause that prohibits elected officials from doing business with foreign governments without permission from Congress.But an appeals court panel ruled the attorneys general lacked standing to bring the lawsuit.Reacting to the decision, President Trump tweeted, “Word just out that I won a big part of the Deep State and Democrat induced Witch Hunt.”

….serving and doing a great job as your President (including accepting Zero salary!).

Earlier this year, a federal district court in Maryland had allowed the lawsuit to move forward.But on Wednesday, a three-judge panel of the 4th Circuit Court of Appeals criticized the Maryland district court judge’s ruling as “so attenuated and abstract that their prosecution of this case readily provokes the question of whether this action against the President is an appropriate use of the courts.”The appeals court decision marks the first legal victory for President Trump as his legal team fights legal challenges on several fronts.In a statement on Wednesday, Jay Sekulow, counsel to the president, hailed the appeals court ruling as “a complete victory.”“The decision states that there was no legal standing to bring this lawsuit in the first place,” Sekulow continued. “This latest effort at Presidential harassment has been dismissed with prejudice.“Earlier this week, in a separate emoluments case, congressional Democrats began issuing subpoenas as part of the discovery process in their case. Justice Department attorneys representing President Trump asked the D.C. Circuit Court of Appeals to intervene and halt the “extraordinary case,” as they called it.Copyright © 2019, ABC Radio. All rights reserved.