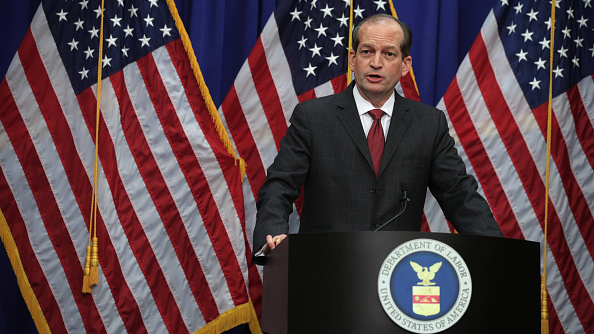 (WASHINGTON) — Labor Secretary Alex Acosta on Wednesday defended his decision to negotiate a plea deal with convicted financier Jeffrey Epstein in a 2008 case in Florida that allowed him to serve a shorter sentence on state charges of prostitution.”The goal here was straightforward,” Acosta said. “Put Epstein behind bars, ensure he registered as a sexual offender, provide victims with a means to seek restitution, and protect the public by putting them on notice that a sexual predator was within their midst.”Acosta added, “We believe we proceeded appropriately.”When asked by ABC News’ Tom Llamas whether Epstein’s victims deserved an apology, Acosta responded by noting decisions the prosecutor in the case made to try to help victims secure financial restitution.”When it was finally clear that Epstein would comply with the agreement, she talks about how she made efforts to notify the victims,” Acosta said.Acosta has faced growing calls from top Democrats that he resign over his role in the controversial 2008 plea deal in Florida involving Epstein, arrested over the weekend on federal charges of sex trafficking and conspiracy in New York.During his time heading the U.S. Attorney’s Office in Miami, Acosta negotiated a plea deal that allowed Epstein to serve a 13-month sentence on state prostitution charges, avoiding more serious federal sex trafficking charges calling for a much longer prison term. While serving out his sentence in a private wing of the Palm Beach County Jail, Epstein was allowed out for work release 12 hours a day, six days a week. The deal, now under review by the Justice Department’s Office of Professional Responsibility, also gave Epstein and any alleged co-conspirators immunity from further federal prosecution in the Southern District of Florida.Acosta was asked Wednesday whether he would resign if the Office of Professional Responsibility found misconduct related to the case. Acosta said he would “clearly submit for an interview” but said he would refer to the office for further information the status of the review.For the young women who say they were victimized, justice for Epstein is long overdue.Courtney Wild, who said Epstein abused her when she was younger, has been fighting for years, including suing the Justice Department in 2008, demanding that it make public the plea deal Acosta helped arrange. Wild told ABC News she was unfairly kept in the dark about details of Epstein’s plea agreement while it was being negotiated, in violation of the Crime Victims’ Rights Act of 2004, which guarantees crime victims the right to be informed about developments in their cases.”They could have called me they could have done many things it was like the roles were reversed I was calling them saying ‘Hey my name’s Courtney Wild. I’m a victim of Jeffrey Epstein is there anything happening with this case what’s going on?’ I would get no response,” Wild told ABC News.Wild said she felt that the Justice Department was “excluding me from the resolution of what his outcome should’ve been for what he committed against me and hundreds of other girls.”During his news conference Wednesday, Acosta said victims were delayed notification due to an arrangement in the plea agreement that Acosta said would allow the victims to make claims for restitution. Acosta repeatedly stated that Epstein’s actions were “horrific” but did not offer an apology to victims.”The men and women of my office going back to 2006 and 2007 and 2008, have spent their career prosecuting these types of cases and in their heart, in our heart, we were trying to do the right thing for these victims,” Acosta said.”As to a message to the victims, the message is you need to come forward,” Acosta said.In February, a federal judge ruled in Wild’s favor, determining that the government had failed to confer with the victims before reaching the deal.When asked by ABC News what she would ask Acosta if given an opportunity, Wild said she’d like to know “why he would think that punishment is appropriate?”Michelle Licata, who has also said she was a victim of Epstein’s, echoed Wild’s anger toward Acosta and had her own question for the Labor secretary.”How would he feel if it was his daughter?” Licata asked.Acosta defended his handling of the case in a series of tweets on Tuesday.”The crimes committed by Epstein are horrific, and I am pleased that NY prosecutors are moving forward with a case based on new evidence,” Acosta wrote. “With the evidence available more than a decade ago, federal prosecutors insisted that Epstein go to jail, register as a sex offender and put the world on notice that he was a sexual predator.”Epstein’s arrest over the weekend has ratcheted up calls from Democrats for Acosta to resign as secretary of the Department of Labor, his position on the president’s cabinet. The president defended Acosta on Tuesday while answering reporters’ questions in the Oval Office, calling him an “excellent” secretary of labor. “I feel very badly actually for Secretary Acosta because I’ve known him as someone who has worked so hard and has done such a good job,” Trump said.At the same time, Trump said his administration will be looking “very closely” into Acosta’s role in Epstein’s plea deal.Trump was quoted in 2002, before any allegations had been made, calling Epstein a “terrific guy.” He told reporters Tuesday that while he did know Epstein, it’s been many years since the two last spoke.”I had a falling out with him a long time ago, I don’t think I’ve spoken to him in 15 years, I wasn’t a fan,” Trump said. “I was not a fan of his, that I can tell you.”Prosecutors from the U.S. Attorney’s Office for the Southern District of New York are currently arguing that Epstein be held in detention pending his trial, calling him an “extreme flight risk.” If convicted, Epstein, who has pleaded not guilty, could face up to 45 years in prison.

What is Title 42? Amid backlash, Biden administration defends use of Trump-era order to expel migrants
Trump return to White House ‘would be a disaster’ for US intelligence: Former DHS whistleblower
Pfizer CEO says it’s possible to distribute both boosters and primary doses
3 dead in Amtrak train derailment in Montana
Culture thrives in America’s most Hispanic, Latino state: New Mexico
Generational wealth implications: Black and Latino-owned homes are more likely to be undervalued