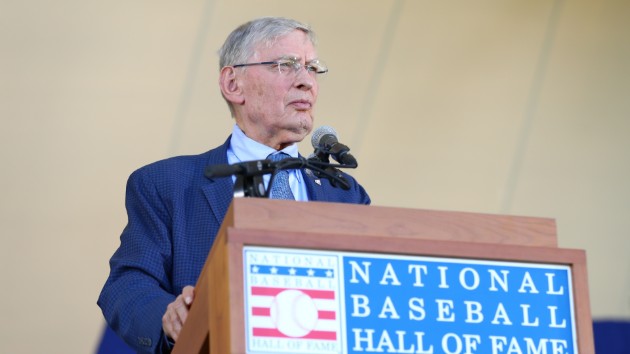 (WASHINGTON) — Bud Selig presided over Major League Baseball as commissioner for 22 years — a tenure that included a canceled World Series, the steroids era, its aftermath, a dramatic expansion of the league and of the economics of the game. In all that time, Selig, who admits to frequently using expletives, said he only once dropped an F-bomb on a sitting vice president. He recounted getting into a heated discussion with then-Vice President Al Gore in his new book, For the Good of the Game, after he felt that Gore was taking the players’ union’s side during a tense meeting at the White House. “I know I can on occasion drop a lot of F-bombs and do a lot of other things,” Selig told ABC Political Director Rick Klein on the “Powerhouse Politics” podcast, in a special edition recorded the week of the MLB All-Star Game. “It was pretty wild because you know it was the future of the game. We worked our way around it — went through a lot of torture though.” The players’ strike that sparked that exchange resulted in the cancellation of the 1994 World Series and extended into the 1995 season. But there hasn’t been another work stoppage in baseball in the quarter century since, prompting Selig to view that as a step necessary to help fuel the game’s growth over the next generation.”Sometimes you have to go through some agony to get to where you want to get,” he said. “Losing the ’94 World Series was absolutely heartbreaking. But the system was broken. The clubs wanted a [salary] cap. Every other sport had a cap. We have worked our way around it to this day without one, but I guess I think future historians will really view that as something you had to go through to get to where we wanted to go.”Selig said that working with politicians, whom he frequently encountered as the owner of the Milwaukee Brewers and later as commissioner, was a “mixed bag.”He fondly recalled working with former President George W. Bush, once an owner of the Texas Rangers, in the aftermath of 9/11. All baseball games were canceled the week after the terrorist attacks, and during the World Series that followed, Bush threw out the first pitch at Game 1 at Yankee Stadium. Selig called this moment where political leadership came together as “one of the great moments to me in American history” and said he has “high regard” for the former president.On the other hand, he did not mince words describing his working relationship with former Gov. Tommy Thompson, R-Wis., with whom he sparred with on funding for a publicly financed stadium for the Brewers.When asked a hypothetical question about what Selig would change about baseball if he could, he responded saying “ways to speed the game up.” “Games have taken longer. They play it differently today. Relief pitchers are used from the fifth and sixth inning on now,” Selig added. The role of commissioner of baseball can be a lonely job, Selig said, but he added that he “was pretty close to a lot of owners” whether or not they agreed. One individual Selig mentioned was the late George Steinbrenner, who owned the New York Yankees.”We never agreed on much of anything. After all, he ran the Yankees, and I was running the Brewers then of course,” Selig said. “But yet, we were very close friends.” Copyright © 2019, ABC Radio. All rights reserved.

McAuliffe, Youngkin spar over vision for commonwealth in first Va. gubernatorial debate
‘Law & Order: SVU’ co-star Denmore Barnes on his “surprise” exit: “I don’t totally know why this happened”
Emmy Awards host Cedric the Entertainer says he’s committed to improving conditions for Black comedians
COVID-19 live updates: More than 10,000 new deaths reported in US in one week
Tyra Banks defends Olivia Jade ahead of her ‘Dancing with the Stars’ debut: “Olivia is so brave”
Murdaugh murders and mysteries timeline: Key events in the South Carolina family’s scandals and deaths