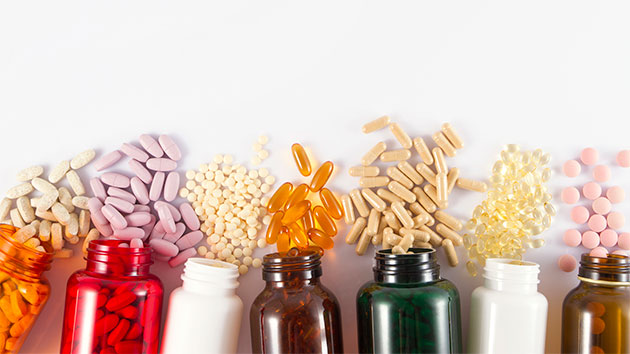 (NEW YORK) –These days, it can be hard to know what’s good for our bodies. When you walk into a wellness store, it’s easy to feel overwhelmed with shelves upon shelves of multivitamins and minerals.

Should I take that vitamin on the shelf? How beneficial are they? Not very, according to a new study published in Annals of Internal Medicine.

Researchers from West Virginia University and Johns Hopkins analyzed 277 randomized controlled trials and said they couldn’t find any proof that people will live longer by regularly taking any of the 16 supplements they studied — vitamins A, B2, B6, B complex, C, D, E, multivitamins, iron, selenium, calcium, calcium and vitamin D, folic acid, beta-carotene, antioxidants and omega-3.

Researchers from West Virginia University and Johns Hopkins analyzed 277 randomized controlled trials and said they couldn’t find any proof that people will live longer by regularly taking any of the 16 supplements they studied — vitamins A, B2, B6, B complex, C, D, E, multivitamins, iron, selenium, calcium, calcium and vitamin D, folic acid, beta-carotene, antioxidants and omega-3.

“Several vitamins — from vitamin A to vitamin E — had absolutely no effect,” Dr. Safi Khan, lead author of the study, told ABC News. “These supplements don’t seem to improve your overall survival.”

Only omega-3 fish oil was moderately protective against cardiovascular disease, according to the study. “Omega-3 supplements were associated with a lower risk of heart attack and coronary heart disease, but the certainty of evidence was low,” Dr. Khan said. “Omega-3 supplements still didn’t appear to improve overall survival.”

It’s important to note that unlike medications that are regulated for safety and effectiveness in the U.S., the only requirement for supplements are that they are safe.

One bright spot from the study suggested that folic acid might reduce the risk of stroke. However, the study analysis also said that there was “moderate” evidence that a combination of calcium and vitamin D increased stroke risk.

The study’s authors also didn’t see much benefit on heart health when changing to the Mediterranean diet, which is rich in olive oil with limited amounts of red meat. “One surprising finding was that the Mediterranean diet lacked any sort of effect on cardiovascular outcomes,” Dr. Khan told ABC News.

In fact, only one diet that the researchers studied had benefits, according to the report, but only in a specific group of people: reduced salt intake was associated with fewer deaths in people with high blood pressure.

In response to the research, Dr. Andrew Shao from the Council for Responsible Nutrition, described on their website as the “leading trade association for the dietary supplement and functional food industry,” told ABC News that “supplements are important to fill nutrient gaps left by sub-optimal diets and to maintain health and well-being.”

Dr. Shao said the current study ignores long-term, real-life results that develop over a period of time and instead just focuses on statistics. “This study only tells half the story, and completely ignores a large portion of the epidemiological evidence base by looking at dietary patterns and supplements as if they are drugs.”

He highlighted that the analysis didn’t include observational data, where researchers track participants over several years, “which is very important when trying to assess the relationship between dietary patterns and chronic disease.”

However, Dr. Khan rebutted that his team didn’t look at epidemiological and observational studies intentionally. Because those types of studies look at relationships between factors and cannot identify direct causes like randomized controlled trials do.

By using randomized controlled trials which he says “remain the gold standard for scientific evidence,” Dr. Khan told ABC News that the type of study that he did are more readily able to point to cause-and-effect.

While he recognizes that more studies are needed, Dr. Khan’s advice to the American public is: “Don’t waste your money!”

“These products are helpful in people with nutrient deficiencies to control symptoms,” Dr. Khan told ABC News. “For everyone else, they do not improve survival or cardiovascular health — focus on a healthy lifestyle instead.”

Dr. Laith Alexander is an MB/PhD student at the University of Cambridge, U.K., and a member of the ABC News Medical Unit.

Generational wealth implications: Black and Latino-owned homes are more likely to be undervalued
COVID-19 live updates: CDC endorses Pfizer boosters for older and high-risk Americans
Man attempts to storm cockpit, strangles and kicks flight attendant on JetBlue flight
A century after arson decimated its Chinatown, San Jose to apologize for past racism and injustices
After people spoke out about COVID-19 vaccines and period changes, research is underway
Kids whose mothers were depressed during pregnancy more likely to be depressed: Study