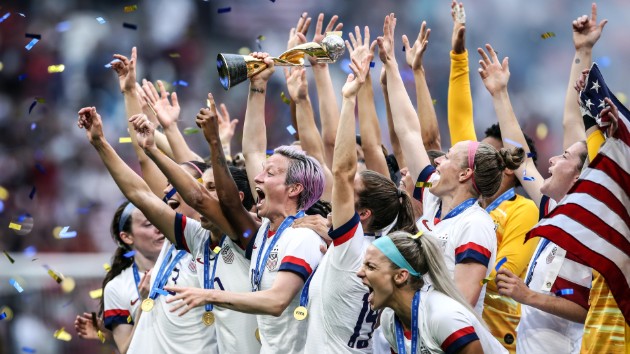 (NEW YORK) — Charles Lindberg was awarded one after his solo transatlantic flight, and then-General Dwight Eisenhower was honored with one for his leadership of the Allied Forces. Astronauts, world leaders, a pope and war veterans all have been honored with ticker-tape parades in New York City’s famed Canyon of Heroes. Now, the Women’s National Team will be the center of the celebration on Wednesday, commemorating its World Cup win in France on Sunday.The team’s been piling up historic titles, but this parade will also mark another first: In addition to being the second women’s team to win back-to-back World Cups, it’s the first women’s athletic team to be honored with back-to-back ticker-tape parades in the Canyon of Heroes.After their 2015 World Cup triumph, the team became the first women’s team to be celebrated with a ticker-tape parade — also the last time a ticker-tape parade was held in New York.”On and off the field, this team represents what’s best about New York City and our nation. The confidence, grit, and perseverance of the U.S. Women’s National Soccer Team serve as an inspiration to all who watch them,” New York City mayor and current presidential candidate Bill de Blasio said in announcing the parade.The parade will start at 9:30 a.m. on Wednesday, followed by a ceremony at City Hall an hour later.The Canyon of Heroes is a man-made section of Broadway in lower Manhattan that spans a little over half a mile, from Bowling Green Park to City Hall Park. The city has hosted 206 parades in the past, starting with the first — celebrating the dedication of the Statue of Liberty — in 1886.The women will now join the ranks of sports teams that have been honored multiple times, including the New York Yankees, who have had nine such parades, and the New York Mets, who have had three. Five Olympic teams have had parades in the Canyon of Heroes. The Women’s National Team will now be tied with the New York Giants with two parades a piece.”New York is incredibly proud to join the rest of the country in celebrating this exhilarating World Cup Victory,” New York City’s first lady Chirlane McCray said in a release from the mayor’s office. “We applaud the U.S. Women’s National Soccer Team’s athletic prowess, their advocacy in fighting for equal pay, and their use of their international platform to speak out against injustice.”Copyright © 2019, ABC Radio. All rights reserved.