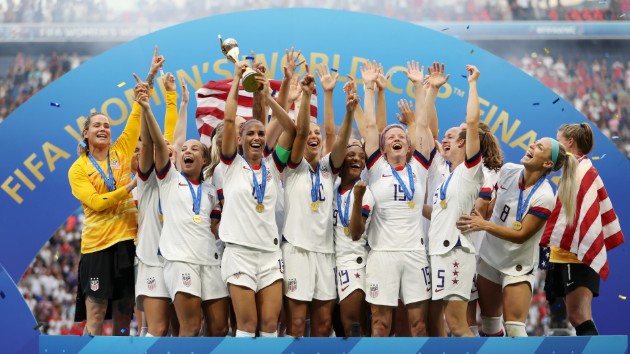 (NEW YORK) — The U.S. Women’s National Team are back home after their historic World Cup win and the celebrations have just begun. Megan Rapinoe, Alex Morgan, Julie Ertz, Rose Lavelle, Alyssa Naeher, Carli Lloyd, Jessica McDonald, Crystal Dunn and the rest of the USWNT joined ABC News’ Good Morning America along with their coach Jill Ellis for a welcome home party and shared in the ongoing excitement on the heels of their record-breaking run. When asked how she felt about being part of a dynasty, Rapinoe said, “I think it suits us. This team fits well into that word.”The now four-time FIFA Women’s World Cup champions defeated the Netherlands 2-0 Sunday to earn their second consecutive title and notched some impressive records throughout the 2019 tournament in France. For Lavelle, the win was the manifestation of something she worked towards her whole life.

“I never liked to call it a dream. It’s always something I’ve envisioned,” she said. “And I felt like it was going to be a reality someday.”The U.S. broke its own record for the most FIFA Women’s World Cup wins of any country with four and joins Germany as the only other country with back-to-back titles. They scored the most goals in a single Women’s World Cup match — 13 against Thailand in their first match in the group stage — and set a new record for the most goals scored in a FIFA Women’s World Cup tournament — 26 in total.Co-captain Morgan tied a record, which had stood from Michelle Akers when the tournament began in 1991, for the most goals scored in a single women’s soccer game with five in the win over Thailand. The team’s manager, Ellis, became the first women’s coach to ever win two World Cup titles in the history of the sport. She became the first coach in men’s or women’s soccer to win two World Cup titles since the 1930s. “It’s been the greatest team I’ve ever been involved with,” Ellis said of the group of talented players.Sunday’s final was the most-watched soccer match on English-language television since the 2015 Women’s World Cup final, according to Fox Sports who broadcasted the tournament.