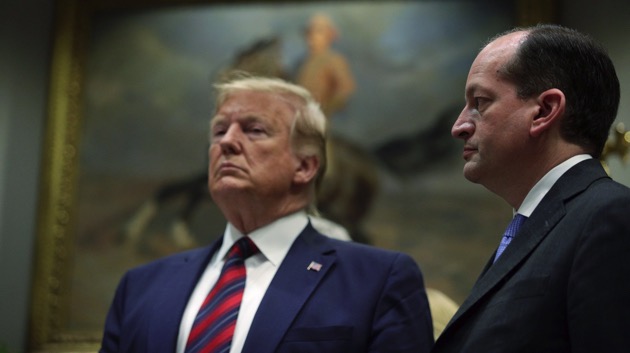 (WASHINGTON) — Amid growing calls from top Democrats for Alexander Acosta’s resignation over his role in a controversial plea deal for convicted sex trafficker Jeffrey Epstein, President Donald Trump on Tuesday offered a partial defense of his secretary of labor, saying he feels “very badly” for him and that he’s been an “excellent” member of his Cabinet.But even as he suggested the decision to let Epstein off a decade ago with a reduced punishment was not Acosta’s alone when he negotiated the plea deal as U.S. Attorney in Florida, the president qualified that, saying his administration will look into Acosta’s role in the deal “very closely.””I can tell you for two and a half job he’s been just an excellent secretary of labor,” Trump said of Acosta in response to a reporter’s question during an Oval Office photo-op with the Amir of Qatar.”I feel very badly actually for Secretary Acosta because I’ve known him as someone who has worked so hard and has done such a good job,” Trump continued.”The rest of it we’ll have to look, we’ll have to look at very carefully, but you’re talking about a long time ago. And it was a decision made, I think, not by him, but by a lot of people, so we’re going to look at it very carefully,” Trump said.The president also acknowledged that he once knew Epstein, whom he called a “terrific guy” in 2002, but said they had a “falling out” without elaborating.”Well, I knew him, like everybody in Palm Beach knew him. He was a fixture in Palm Beach. I had a falling out with him a long time ago, I don’t think I’ve spoken to him in 15 years, I wasn’t a fan,” Trump said. “I was not a fan of his, that I can tell you.”“Why are you talking about Alex Acosta and not Jeffrey Epstein?” White House Counselor Kellyanne Conway said during an on-camera gaggle with reporters earlier Tuesday, when asked repeatedly about whether the president has confidence in his Labor secretary. “Jeffrey Epstein is the one raping young girls.”Epstein was arrested over the weekend on federal charges of sex trafficking and conspiracy in New York. Back in 2007, Acosta was U.S. Attorney in Florida and negotiated a plea deal that resulted in Epstein serving just 13 months of an 18 month sentence on state charges in county jail and avoiding federal charges for an allegedly broad pattern of similar conduct.Not long after Conway spoke, Senate Minority Leader Chuck Schumer, speaking on the Senate floor, said Acosta must step down.“I am calling on Secretary Acosta to resign. It is now impossible for anyone to have confidence in Secretary Acosta’s ability to lead the Department of Labor. If he refuses to resign, President Trump should fire him,” Schumer said. “This is not acceptable. We cannot have as one of the leading appointed officials in America someone who has done this. Plain and simple.”About noon, Acosta tweeted both a defense of his role while supporting the New York case against Epstein as “an important opportunity to more fully bring him to justice.”Conway said she spoke to the president Tuesday morning and that he told her he doesn’t believe he’s been in touch with Epstein in more than a decade but that he finds the charges against him “unconscionable.”“The president told me this morning he doesn’t think he’s talked to him or seen him in 10 or 15 years and like everyone else, sees these charges, or the description of these charges, as unconscionable, and obviously criminal, disgusting,” Conway said.“The president met Secretary Acosta two-and-half years ago when he applied for the job, he was happy to give him the job at Department of Labor, and since then, through any number of reasons, beginning with the president, we’ve got a big jobs boom,” Conway said.Conway also noted that Acosta was questioned during his confirmation hearing about the previous plea deal and “answered questions under oath” but added that the president didn’t know Acosta at the time of the previous case and “didn’t follow the case very closely.”Asked specifically about House Speaker Nancy Pelosi’s earlier call for Acosta to resign, Conway criticized Pelosi for putting the focus on Acosta and said the attention should be on Epstein instead.“It’s classic her … to not focus on the perpetrator at hand, and instead focus on a member of the Trump administration,” Conway said.Former White House press secretary Sarah Sanders had said in March that the administration was reviewing Acosta’s role in the previous plea deal for Epstein.“That’s currently under review. Because of that, I can’t get into a lot of specifics, but we’re certainly looking at it,” Sanders said in March.Asked about the status of that review, Conway did not offer a straight answer and said the focus should be on the charges in New York and not what happened in Florida.Schumer demanded that the Justice Department’s Office of Professional Responsibility make the review public. “This review cannot be kept in the dark, particularly given the new revelations,” he said, adding that Congress should hold hearings.While the president hasn’t commented directly since Epstein’s arrest over the weekend, he was asked back in February if he had any concerns about Acosta’s involvement in Epstein’s case and said that the time that he didn’t know much about it but that it was a “long time ago.