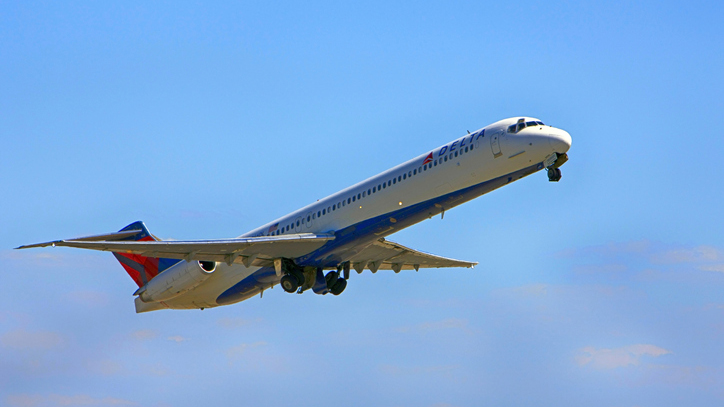 (BALTIMORE, Md.) — Travelers aboard a Delta plane flying from Atlanta, Georgia, to Baltimore, Maryland, had a frightening midair moment when their flight was forced to make an emergency landing in Raleigh due to a possible engine issue.Delta flight 1425 left around 12:48 p.m. Monday from Hartsfield-Jackson International and was bound for Baltimore-Washington International, when about an hour after takeoff, the flight crew reported an issue with one of the plane’s engines.”We are declaring an emergency. We will need crews out there on the rollout,” a pilot could be heard telling air traffic controllers on LiveATC.In a statement, Delta said the flight crew had received “an indication of a possible issue with one of the aircraft’s engines.”Video taken by a passenger showed a metal part bouncing inside one of the engine. Delta said it was a contained failure of the left engine and that the part was the nose cone. An orange glow could be seen around the still spinning shaft in the passenger video.”The captain came on the loudspeaker and said that we had lost an engine and that they were making preparations to have an emergency landing,” Jose Bahamonde-Gonzalez told ABC News affiliate WMAR-TV in Baltimore.There were 148 passengers on board.”After we heard the boom, we just saw all this smoke come up into the cabin and that’s when we really started freaking out. … It started slowing down a little bit and it was getting hot. The air cut off,” passenger Avery Porch told WMAR-TV. “I was about to be the first person to jump off.”Tyler Kreuger, Porch’s boyfriend, said that even though he had no service midair, he still texted his parents: “I love you.”In video taken by a passenger inside the cabin, flight attendants could be heard quickly giving instructions, telling passengers to put their heads down and brace for landing, as the plane neared Raleigh.”Ladies and gentlemen, the flight attendants will come through … and make sure we are prepared for landing. Fasten your seat belts, loosen your collars, remove ties, scarves and eyeglasses,” a flight attendant could be heard telling passengers.The aircraft — a 32-year-old MD-88 with the engines mounted on the fuselage near the tail — made an emergency landing at Raleigh-Durham International around 2:27 p.m., according to FlightAware.The plane landed safely in Raleigh as fire and rescue teams waited on the tarmac. There were no reported injuries.In a statement, Delta apologized to travelers for the inconvenience. WMAR-TV said passengers were given a $30 food voucher to use while they waited for their next flight.Passengers made it to Baltimore hours later.