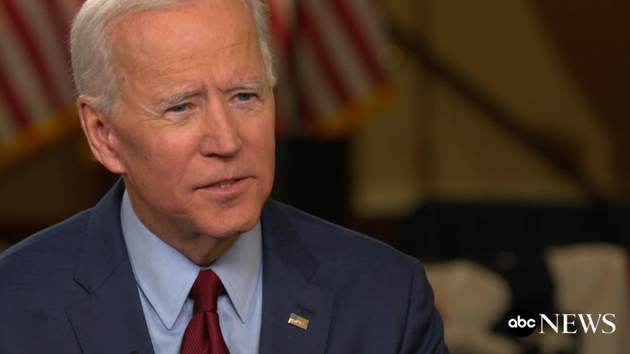 (WASHINGTON) — Former Vice President Joe Biden and his wife, Dr. Jill Biden reported more than $15 million in income since leaving the White House in early 2017, newly released tax returns show.Tax returns, released by the Biden Campaign, show the Biden’s had an adjusted gross income of $4,580,437 in 2018, and $11,018,346 in 2017.Since leaving office, the Biden’s have paid more than $5.27 million in federal taxes, which is roughly a third of their income.According to the campaign, “the majority of the couple’s 2017 and 2018 income — specifically, $10,048,739 (in 2017) and $3,236,764 (in 2018)–is attributable to book payments for the writing of Promise Me, Dad and Where the Light Enters and to paid speaking engagements.”Those speaking engagements carried large sums for the former vice president, ranging from $8,040 for a Miami book fair to $190,000 for a speech as a part of a visiting lecture series at Drew University in Madison, N.J., Biden’s financial disclosure report shows.His wife also earned more than $700,000 for speaking engagements associated with her book from March 2018 through early May 2019, the disclosure says.The former vice president also received more than $400,000 from VIP events associated with his book tour in 2017 and 2018, according to the disclosure.“These amounts were paid to Vice President Biden and Dr. Biden through their respective S-Corporations, known as CelticCapri and Giacoppa. Both Vice President Biden and Dr. Biden employed staff and engaged contractors to support their respective work through their S-Corporations,” a campaign release said.His financial disclosure form shows Biden also earned an additional $425,000 in ‘salary’ from CelticCapri between January 2018 and June 2019.Biden also earned a total of $776,527 in salary as a professor at the University of Pennsylvania, according to the campaign’s release.The income earned by the Bidens is a far cry from their income while in the White House and when he served in the Senate–where he served for several decades until becoming vice president in 2008.Biden often touts his “Middle Class Joe” moniker and on the trail often says that he was the poorest man in Congress.“I’m called middle-class Joe. It’s not meant as a compliment — it means I’m not sophisticated,” a line Biden often repeats on the campaign trail.A central message of Biden’s campaign pitch is rebuilding the middle class–recalling his own middle class roots. It remains to be seen if Biden’s newly reported wealth will have an impact on his message with voters.After leaving the White House, the Bidens upped their charitable giving. The couple gave only $5,889 in 2016. In 2017, their giving skyrocketed to more than $1 million. The pair gave to various charities and religious groups. That year, the largest contribution of $180,000 went to the United Jewish Federation of Chicago. The Bidens also donated $100,000 to their own non-profit The Joseph Biden Foundation.In 2018, the couple gave $275,796 to various charities with the largest sums going the Delaware Center for Justice and the Beau Biden Foundation for the Protection of Children ($100,000 and $50,000, respectively). They also donated $25,000 to Walking with the Wounded, a British charity associated with Prince Harry, which helps injured British veterans transition into civilian life.