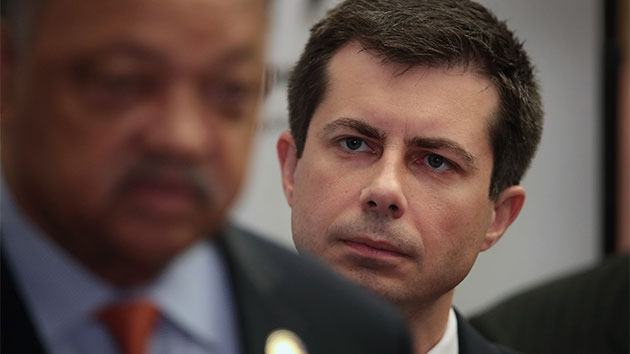 (SOUTH BEND, Ind.) — The family of a black man who was fatally shot by a white police officer in South Bend, Indiana, said they delivered a petition on Tuesday to the city’s mayor, 2020 Democrat Pete Buttigieg, asking him to recommend that the officer’s pay be revoked.

Eric Logan, a 54-year-old father of seven, was leaning inside a vehicle when South Bend Sergeant Ryan O’Neill approached him and asked if the vehicle belonged to him, authorities said. The officer, a 19-year veteran of the South Bend Police Department, said Logan came toward him with a knife and refused to drop it before he fired shots.

“It’s unfair to the Logan family, it’s unfair to the taxpayers of South Bend, Indiana, and his friends as well that this officer is receiving his pay from taking a life from this community,” Vernado Malone, Logan’s friend and founder of Justice for South Bend, said during a press conference on Tuesday.

The shooting drew national attention to South Bend — home of the University of Notre Dame — last week when Buttigieg skipped a handful of scheduled campaign stops to meet with angry community members in his hometown. The police department suspended O’Neill with pay in the wake of the June 16 shooting, but Logan’s family said the mayor has the power to override that decision.

Logan’s family has also filed a lawsuit against the officer and the city, seeking undisclosed compensatory and punitive damages.

“We are asking the mayor and he has a duty to make a recommendation that Sergeant O’Neill be placed on leave, pending investigation, without pay,” Malone said. “The mayor has said he’s with the Logan family, and he wants change in this community. This here is the time, mayor.”

Buttigieg does not have the direct authority the power to unilaterally make such a decision, according to his office, but Malone said the family wants the mayor to at least make the recommendation on their behalf.

“This is the time, Mayor Pete, to step up and make your own demands and changes,” he said. “You don’t need a police board or anybody else. We are asking you, as our mayor, to obey this demand that we will be giving you today.”

Buttigieg addressed calls for him to intervene in an interview with ABC News on Tuesday, saying the decision would have to come from the public review board.

“It’s a board of safety. It’s five civilians appointed by the mayor, who meet and receive evidence and in a transparent and accountable process, decide on matters like this,” he said. “I know that some people imagine that a mayor sits up there in the office and decides who’s in trouble, who’s fired, who goes up and who goes down.”

“But we have a legal system here and it’s constraining and it’s frustrating,” he added.

A judge has appointed a special prosecutor to further investigate the deadly shooting to decide if criminal charges are warranted. The local Fraternal Order of Police claims Buttigieg is prejudging O’Neill for political gain and called for him to recuse himself from any decision making.

“Mayor Buttigieg has repeatedly shown that he’s more concerned about boosting his own presidential political campaign than ensuring a fair investigation about an incident where a veteran police officer was forced to defend himself when a dangerous felon attacked him with an eight-inch hunting knife,” Harvey Mills, president of the South Bend Fraternal Order of Police, said in a statement.

“If he wants to honor the oath he took, Mayor Buttigieg will recuse himself from this matter by taking no part in any decisions, conversations, or other aspects of it.”

A crowd-funding campaign, created by the organization, had raised nearly $80,000 as of Tuesday evening to support O’Neill’s legal defense.