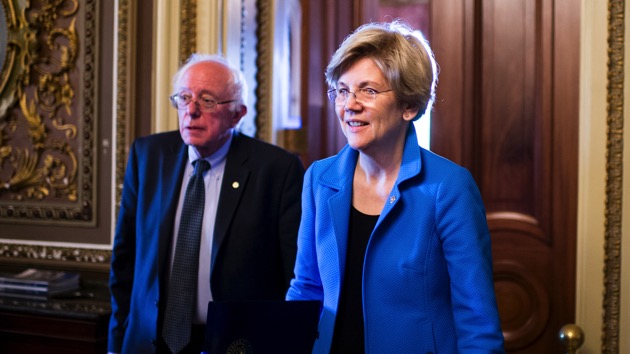 (WASHINGTON) — Sen. Elizabeth Warren’s presidential campaign announced Monday that it raised a total of $19.1 million in the second quarter, more than three times the amount her campaign raised last quarter and an amount reflective of the recent surge of support for the Massachusetts lawmaker.Warren raised more than Sen. Bernie Sanders of Vermont, a fellow 2020 contender similarly fighting for the Party’s progressive voters, by about $1 million. Warren out-raised Sen. Kamala Harris of California, who raised $12 million, by about $7 million. She was about $6 million shy of the $24.8 million fundraising haul announced by South Bend, Indiana, Mayor Pete Buttigieg and about $2.5 million shy of the the $21.5 million announced by former Vice President Joe Biden.Warren received a total of 683,000 individual contributions from 384,000 grassroots donors in the last three months of the presidential race, according to an email to supporters Monday. More than 80% of the donations in the second quarter were from first-time donors to her presidential campaign.Warren said she was “humbled by the depth of grassroots commitment” in a tweet after the numbers were announced.

I am humbled by the depth of grassroots commitment to our campaign. This is how we make our government and democracy work for everyone, not just the wealthy and well-connected. Thank you, and let’s keep at it. https://t.co/l6SGHeH2pe

Recent national polling shows Warren among the top four candidates in the race, in addition to Biden, Sanders and Harris.The average donation to Warren’s campaign was $28, the same as last quarter, according to the campaign. By comparison, Sanders received more individual contributions — nearly 1 million, according to the campaign — with a lower average of about $18. Both Sanders and Warren have sworn off money from political action committees, or PACs, and events with high dollar donors. Warren has also gone a step further, promising not to attend closed-door fundraisers with donors.“To sum it up: We raised more money than any other 100% grassroots-funded campaign. That’s big,” Warren’s campaign manager Roger Lau wrote in an email to supporters Monday afternoon, drawing a direct comparison to Sanders, the only other candidate in the race so far to pursue an entirely grassroots campaign.“You’re making it possible to build a presidential campaign without catering to wealthy donors — with no closed-door fundraisers, no Super PACs, and no money from Washington lobbyists, corporate PACs, or, for that matter, PACs of any kind,” Lau wrote Monday.Over the course of the last three months, Warren spent $10.6 million, ending the first half of the year with $19.7 million left in the campaign’s war chest, the campaign said. That amount of cash on hand will likely quell critics who said Warren was burning through fundraising dollars with hefty staff hirings in early states, where her campaign has built out some of the largest operations on the ground. At the end of the second quarter, the campaign reported around 300 people total on staff and about 180, or 60%, in early states like Iowa, New Hampshire, South Carolina and Nevada.Buttigieg, whose campaign said he raised $24.8 million in the second quarter, ended the quarter with $22.6 million left over while Sanders, who raised $18 million, ended the quarter with $30 million on hand.Not all of the campaigns have released their fundraising numbers yet, nor have they chosen to release the same details. Federal election rules require they do so by the 15th of the month, a deadline set by the Federal Elections Commission.In addition to Warren, Harris, Sanders, Biden and Buttgieg, Montana Gov. Steve Bullock and Colorado Sen. Michael Bennet have also released their fundraising numbers. Both launched their campaigns in mid May, about halfway through the second quarter. Bullock raised around $2 million, his campaign said Friday, and Bennet raised $2.8 million, his campaign announced on Wednesday. Bennet also transferred $700,000 from his Senate campaign account, bringing his total number to $3.5 million.Copyright © 2019, ABC Radio. All rights reserved.