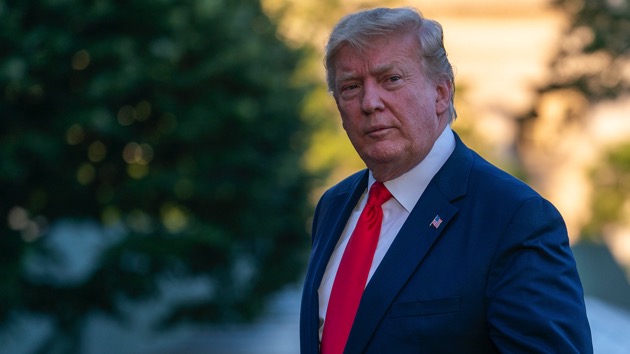 (WASHINGTON) — President Donald Trump said his administration will fight for a better environment in a speech that did not mention the environmental threat of climate change on Monday.Trump campaigned on rolling back some of the stringent environmental proposals put forth under President Barack Obama, saying they went too far to single out industries like coal, but the administration claims the U.S. still has some of the strongest environmental protections.The president echoed those statements on Monday, saying the Obama administration wanted to “punish” workers by putting more regulations on industry, but his administration is rolling back those regulations and seeing a strong economy and seeing long-term improvement in air and water in the U.S.”We have only one America, we have only one planet, that’s why every day of my presidency we will fight for a cleaner environment and a better quality of life for every one of our great citizens,” he said. “Above all we will remain loyal to the American people and be faithful stewards of God’s glorious creation from sea to shining sea.”The president did not mention climate change, other than to mention his decision to withdraw from the Paris Agreement, a landmark international accord to fight climate change signed by more than 190 counties in 2015.But he did take a moment to attack the Green New Deal, an ambitious resolution proposed by Democrats in Congress to set a framework for combating climate change. Trump said the proposal would cost $100 trillion, repeating a talking point used by Republicans on Capitol Hill, despite the fact that the resolution would not change or implement any new policies.Trump said the proposal would eliminate jobs and “crush the dreams of the poorest Americans,” and pledged that he would not support it.The president and administration officials have vocally cast doubt on research that shows significant risks to the U.S. from the warming climate, including more severe, extreme weather, coastal flooding and damage to the economy.In a new ABC/Washington Post poll, 62% of respondents said they disapproved of the president’s handling of climate change.The president mentioned some specific efforts from the Environmental Protection Agency, Interior Department and other agencies that he said were helping the environment, including work to speed up cleanups of contaminated sites, updating rules on lead and copper pipes, and providing money to build a dike that could prevent the spread of fertilizer, which contributes to algae blooms off the coast of Florida.He also repeated comments that he wants the U.S. to have the “cleanest air and cleanest water.”While the U.S. has made drastic improvements on the quality of air and water in recent decades, Trump has reversed course on several policies proposed by the Obama administration to push for more reductions in pollution and greenhouse gas emissions that contribute to climate change.An EPA document on new air quality data, set to be released next week, shows that while air pollution has decreased dramatically in recent decades there have been more unhealthy air days and increased pollution from tiny particles of pollution in the last two years, partly due to smoke from wildfires.Environmental groups slammed the move in statements and on social media, saying that Trump is trying to mislead the public about his administration’s impact on the environment and take credit for improvements made under several other presidents in recent decades.Stan Meiburg, a former regional EPA official and acting deputy administrator from 2014 to 2017, said that while air quality in the U.S. has made a lot of improvements, the Trump administration has blocked actions he says would make it even better, or could lose some of the gains as climate change continues to exacerbate air pollution.”The basic message is we’ve made a lot of progress but the things the administration is doing will both make that progress less likely in the future and make it worse,” he said.For example, the president recently finalized a rollback of Obama’s signature climate policy, known as the Clean Power Plan, and replaced it with a less aggressive set of rules. The Obama-era policy, which never took effect, would have required states to submit extensive plans on how they would reduce carbon dioxide emissions by requiring power plants to install new technology or switching to more renewable energy sources. The Trump administration said that plan went too far by trying to shut down coal-fired power plants.Meiburg said an EPA administrator under President George W. Bush called the government’s impact on the environment an “intergenerational relay race” and improvements are long term and not a reflection on the current administration.”With this administration, not only have they dropped the baton, it’s like they’re trying to run the relay race in the wrong direction,” he said Monday.EPA Administrator Andrew Wheeler told reporters that the administration acknowledges the contributions of previous administrations but is trying to get the message out that the overall air and water quality in the U.S. has improved since the agency was founded in the 1970’s.”We’re not taking credit for what happened before. But we’re acknowledging, and I think the American public needs to understand if they listen to the news every night they might think the air has gotten worse over the last 49 years. When actually the air has gotten better,” Wheeler said on a call with reporters previewing the remarks.Wheeler said the administration has made plastic and debris pollution in the oceans a priority and the re-negotiated trade deal with Canada and Mexico includes language where each country pledges to reduce ocean pollution.Despite Trump’s comments that America has “crystal clean water,” EPA officials under Trump have said they’re concerned about the number of drinking water systems around the country that are violating regulations, and federal and state governments are facing increasing concern about chemicals contaminating drinking water and groundwater in some areas.

Haitian migrants cleared from camp at Texas border but controversy continues
Generational wealth implications: Black and Latino-owned homes are more likely to be undervalued
Nick Cannon teases possibility of having more children: “My therapist says I should be celibate”
Let’s-a go! Chris Pratt to voice Mario in upcoming ‘Super Mario Bros’ movie
‘The View’ hosts leave mid-show due to testing positive for COVID-19, miss Vice President Harris interview
Gabourey Sidibe shares the special connection she has to her new podcast thriller ‘If I Go Missing the Witches Did It’