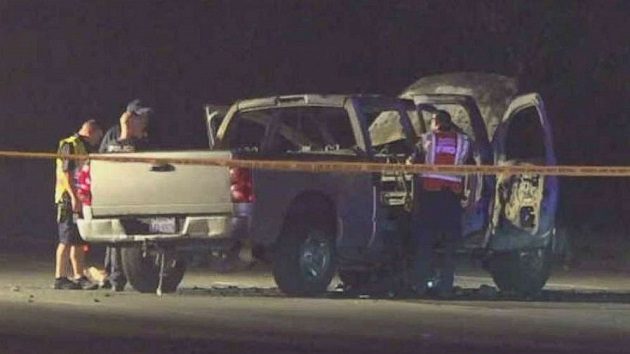 (HOUSTON) — The suspect in a road rage shooting that ignited fireworks inside a family’s car, causing serious burns, has surrendered to police.Houston County Sheriff Ed Gonzalez announced on Sunday evening that Bayron J. Rivera turned himself in to police in connection with the incident. The 18-year-old will be charged with four counts of aggravated assault for the Fourth of July shooting. Rivera allegedly got into an argument with the family’s father, who was the driver of a truck, in Harris County, outside of Houston on Thursday. The two pulled into a gas station, where the other driver pulled out a gun, according to police. The father tried to drive away, but Rivera allegedly opened fire on the truck, igniting fireworks that were in the back of the vehicle.The incident took place at about 9:30 p.m. on the night of the Fourth of July, right after the family had gone to buy fireworks at a stand, authorities said.”He supposedly cut him off and then once that happened, that’s when the dude started shooting,” eyewitness Desmond David told Houston ABC station KTRK-TV.Video of the incident shows the entire truck was engulfed in flames, as fireworks exploded from the vehicle.Good Samaritans helped to pull the family from the car, while the suspect took off, triggering a three-day search.The parents and two children all suffered serious burns in the incident. The children, ages 1 and 2, were airlifted to the University of Texas Medical Branch at Galveston, and are in critical condition, according to authorities. The parents are also still in the hospital.There had been a $5,000 reward offered for information leading to the suspect’s arrest.