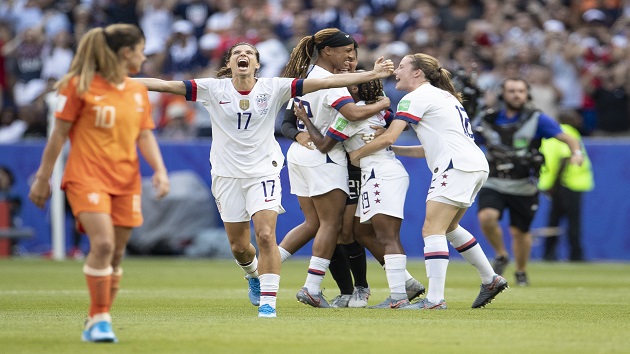 (NEW YORK) — President Donald Trump congratulated the U.S. women’s soccer team for their historic World Cup win against the Netherlands on Sunday and tweeted last month that he is planning on inviting the team to the White House, “win or lose.”But amid a public feud with the team’s co-captain and top scorer, Megan Rapinoe, Trump appeared less certain about the invitation when talking to reporters on Sunday.”We haven’t really thought about it,” he said. “We’ll look at that.”The Trump administration has so far hosted only one women’s sports team at the White House — the Baylor University Lady Bears — and has not invited any of the WNBA champions since Trump took office. ABC News has reached out to the White House, but a request for comment was not returned.But House Speaker Nancy Pelosi did not hesitate and tweeted an invitation to the players to visit the U.S. Capitol, tweeting, “I’m pleased to invite the players to the US Capitol as a team or individually to celebrate your inspiring victory.”Pelosi’s invitation comes after Rapinoe, who drew Trump’s ire when she declared last month that she’s “not going to the f—— White House” if her team wins, accepted Democratic Rep. Alexandria Ocasio-Cortez’s offer to visit the Capitol instead.This is not the first time that Pelosi and Democrats have gotten in the middle of one of Trump’s feuds with sports teams and athletes.Last year, Pelosi and Democratic Rep. Barbara Lee — who both represent California — invited the Golden State Warriors and their families to the Capitol amid news that Trump, who withdrew his invitation to the NBA champs in 2017, had decided not to invite them at all after their 2018 win.”I stand by the comments that I made about not wanting to go to the White House, with the exception of the expletive,” Rapinoe said amid some backlash following her initial comments and criticism from Trump. “My mom would be very upset about that.”Rapinoe, who has been an outspoken critic of the Trump administration, was one of the first athletes to follow then-NFL quarterback Colin Kaepernick’s lead in September 2016 by taking a knee during the playing of the national anthem to protest racial oppression and police brutality against black people.Trump slammed Rapinoe on Twitter and claimed that “leagues and teams love coming to the White House,” but since Trump took office, the president has feuded with a wide variety of sports champs — from football to basketball and baseball — and many players refused invitations to the White House, citing their opposition to Trump.”I am a big fan of the American Team, and Women’s Soccer, but Megan should WIN first before she TALKS! Finish the job! We haven’t yet … invited Megan or the team, but I am now inviting the TEAM, win or lose. Megan should never disrespect our Country, the White House, or our Flag, especially since so much has been done for her & the team. Be proud of the Flag that you wear. The USA is doing GREAT!” Trump wrote in a series of tweets.Teammate Ali Krieger, who defended Rapinoe following Trump’s criticism, tweeted that she “will sit this one out as well,” and cited her opposition to the Trump administration’s actions regarding “LGBTQ+ citizens, immigrants & our most vulnerable.”Team forward Alex Morgan said on Friday that the women will decide as a team whether to accept a potential White House invitation.Copyright © 2019, ABC Radio. All rights reserved.

These vaccine mandates are already in place to attend school in the US
What to expect as FDA advisory panel debates Pfizer COVID booster shots
COVID-19 live updates: US reports highest daily death toll in nearly 7 months
Happy Halloween! Snoop Dogg and Martha Stewart reunite to bring tasty treats with new food competition
Ken Jennings, Mayim Bialik to host ‘Jeopardy!’ for remainder of 2021
After testifying on sexual abuse, Aly Raisman says she hopes ‘somebody listens to us’