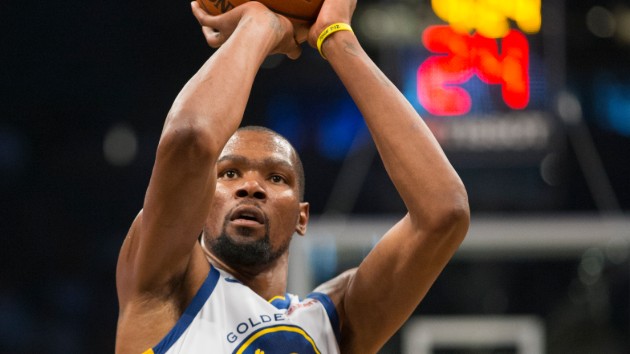 (NEW YORK) — When Kevin Durant takes the court as part of the Brooklyn Nets, he won’t be donning the No. 35 on his jersey — the number he’s worn his entire NBA career. Instead, he will have the No. 7 stitched on his jersey, the small forward announced Sunday night.Durant, 30, made the announcement in an Instagram post which featured a photo of a No. 7 Nets jersey in a locker room. He tagged Thirty Five Ventures in the post, which is Durant’s business venture with his manager.On Thirty Five Ventures’ Instagram page, Durant wrote on the number change:

“35 took my family and me from Seat Pleasant, MD and showed us the world. 35 allowed me to meet people that I never would’ve had the chance to meet, experience things I would never have had the chance to experience, and achieve things that I never would have been able to achieve. 35 allowed me to go to the University of Texas to play basketball, 35 allowed me to achieve my dream of playing in the NBA in Seattle. 35 allowed me to play basketball in Oklahoma City and form bonds and friendships that will last a lifetime. Lastly, 35 allowed me to go to the Bay Area and win two championships and form brotherhoods that no time or distance will ever break. 35 was chosen in honor of someone very near and dear to me. I will always honor him and honor the number 35. But as I start this new chapter in my basketball life, the number I’ll be wearing on my back is the number 7 next time you see me on the floor. One time Brooklyn.”

The Nets on Sunday officially announced the acquisition of Durant in a trade with the Golden State Warriors. Along with Durant, Brooklyn acquired a protected 2020 first round draft pick from the Warriors. Golden State, in return, received guards D’Angelo Russell and Shabazz Napier and forward Treveon Graham.While the Nets did not disclose further details on Durant’s deal, ESPN reports the contract is for four years and worth up to $164 million.The Warriors, with whom Durant played for the past three seasons and won two championships, have announced that they plan to retire Durant’s No. 35.Copyright © 2019, ABC Radio. All rights reserved.

After quitting the fashion industry, supermodel Halima Aden is back — this time, on her own terms
Senate grapples with debt limit, stopgap funding with days to government shutdown
Vaxxed ‘Dancing with the Stars’ pro Cheryl Burke quarantines after positive COVID-19 test
“It was a mistake of some sort”: ‘The View’ co-hosts Sunny Hostin & Ana Navarro COVID-19 negative after on-air scare
Will Smith discusses his open marriage with Jada Pinkett-Smith: “Jada never believed in conventional marriage”
Legacy and landscape at stake for Pelosi, Biden: The Note