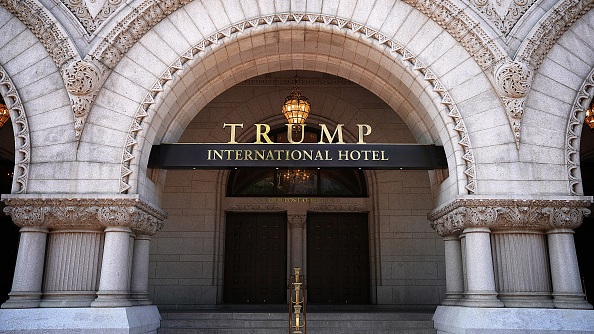 (WASHINGTON) — Congressional Democrats have begun issuing subpoenas as part of the discovery process in their emoluments lawsuit targeting President Donald Trump, according to a statement issued Monday by the two members of Congress leading the suit.The 37 subpoenas issued “to a number of Trump business enterprises, including the Trump Organization, [seek] information about foreign government payments accepted by six Trump properties, as well as trademarks granted to Trump businesses by foreign governments,” according to a statement from Sen. Richard Blumenthal, D-Conn., and Rep. Jerry Nadler, D-N.Y., on behalf of the more than 200 Democrats who signed on to the lawsuit.Democrats sued President Trump last summer, arguing that under the foreign emoluments clause in the Constitution, Congress must consent to all foreign payments — or emoluments — his businesses earn, including his Trump International Hotel in Washington, D.C. The lawmakers are suing for standing to sign off on any foreign business conducted by President Trump’s businesses.”We are taking an important step towards obtaining key documents to understand the full scope of Trump’s foreign business dealings,” Rep. Nadler wrote in a statement on Monday.In June, the federal district judge overseeing their case, Judge Emmet Sullivan, denied President Trump’s latest bid to block the lawsuit and allowed Democrats to begin collecting evidence in discovery.Earlier on Monday, Justice Department attorneys representing President Trump asked the D.C. circuit appeals court to intervene and halt this “extraordinary case,” as they called it.Appeals are typically filed after a case has been settled. But Trump’s legal team wants an appeals court to intervene now, “given the unique and fundamental separation-of-powers concerns presented by allowing a suit to proceed and discovery to commence,” the Justice Department lawyers wrote Monday.Elizabeth Wydra, the president of the Constitution Accountability Center, who argued the case in court on behalf of congressional Democrats, wrote Monday that she is “confident that the D.C. Circuit will reject this latest, groundless attempt to delay these proceedings and, as the District Court did, allow discovery to proceed.”President Trump is facing another emoluments lawsuit brought jointly by the attorneys general of Maryland and the District of Columbia, which argues that Trump violated the U.S. Constitution’s foreign emoluments clause by benefiting from the patronage of foreign dignitaries at the Trump International Hotel, which is located just a few blocks away from the White House.

What is Title 42? Amid backlash, Biden administration defends use of Trump-era order to expel migrants
Trump return to White House ‘would be a disaster’ for US intelligence: Former DHS whistleblower
3 dead in Amtrak train derailment in Montana
Culture thrives in America’s most Hispanic, Latino state: New Mexico
GOP-led review of Arizona ballots reaffirms Biden’s win
Nick Cannon teases possibility of having more children: “My therapist says I should be celibate”