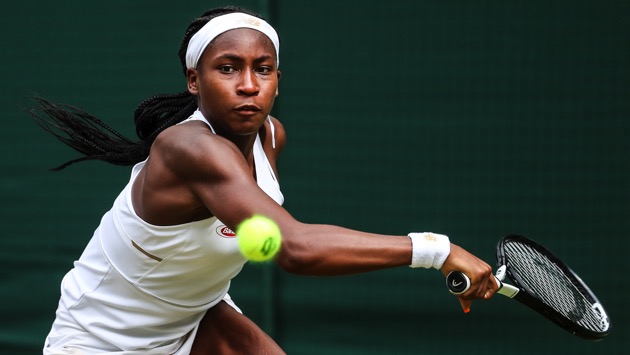 (LONDON) — Coco Gauff, the 15-year-old tennis player who burst onto the professional scene with a stunning victory over Venus Williams last week, is leaving Wimbledon with a loss in straight sets — and a host of new fans ready to motivate her for the next tournament.”Your journey is far from over, @CocoGauff,” tennis legend Billie Jean King tweeted. “Looking forward to watching your future successes on the court and off. #BigFan”Gauff’s eye-catching debut at Wimbledon came to an end Monday in the fourth round with a loss to Romanian star Simona Halep, 27, who was seeded No. 7, 6-3, 6-3.

The No.1 Court crowd rises to acknowledge all the excitement @CocoGauff has given us 🤗And remember – this is just the beginning… #Wimbledon pic.twitter.com/UBiOYSxPeU

“I hope they learned about me that I’m a fighter,” Gauff said in a post-match press conference after her loss about her new fans. “I’ll never give up. I hope they learned from me that, I mean, anything is possible if you work hard, just continue to dream big.”It’s likely Gauff’s Wimbledon success, which made her an overnight sensation, will outlive her loss. In the first round of ladies’ singles, Gauff beat her icon, Williams, 39, 6-4, 6-4. To get there in the first place, Gauff became the youngest player to ever qualify for Wimbledon.She and her parents became visibly emotional after that match, and they quickly won over tennis fans everywhere. In an interview with GMA, Gauff’s parents credited Venus and her sister Serena Williams for paving the way.”We hadn’t seen many African-American women in the sport, so when they started winning and having success and trailblazing, some of the challenges that they went through made it a lot easier to get into the sport and it allowed us to be a lot more confident about choosing [tennis],” Gauff’s father, Corey, said.Gauff, who has been competing while taking school tests, has been humbled and excited by the attention she’s getting — including from Beyoncé’s mom, Tina Knowles, Jaden Smith and Michelle Obama.

“She’s one of my role models,” Gauff said of Obama’s tweet about her, according to People. “So it was just cool to see that she knows I exist.”But above all, it’s Gauff’s athletic performance on those famed grass courts that has garnered attention for the young phenom.After beating Williams, she beat Magdaléna Rybáriková to reach the third round, where she faced Polona Hercog of Slovenia.That match on Friday cemented her place in history, as she fought back from two match points, including a second set tiebreak, to come out on top. In doing so, Gauff became the youngest player to make it to the second week of Wimbledon since 1991.Gauff also caused some conversation with her entrance in the mixed doubles Wimbledon tournament, when Brit Jay Clarke left original partner Harriet Dart to instead play with Gauff at the last minute. They did, however, lose in the opening round.”If somebody told me this maybe three weeks ago, I probably wouldn’t believe it,” Gauff said after her loss on Monday. “But I think just putting in the work definitely raised my confidence because I knew how hard I worked and I knew what shots I could make and what was possible.””I’m only 15,” she continued. “Like, I’ve not nearly gotten or developed my game. I started tennis at six. I’m so excited to see, if I continue to work hard, what other success I can do in the future.”Copyright © 2019, ABC Radio. All rights reserved.

‘Ted Lasso’? ‘WandaVision’? ‘Mare of Easttown’? Who will clean up on Sunday’s Emmy night?
Apprehensions at the southern border surpass 200,000 in August
Now you can own James Bond’s DB5 — the book, that is
Shannen Doherty says breast cancer is “part of life”: “I never really complain”
Where is Dulce Maria Alavez? Age-progression photo released two years after her disappearance
‘Ted Lasso’ scores at 2021 Television Critics Association Awards