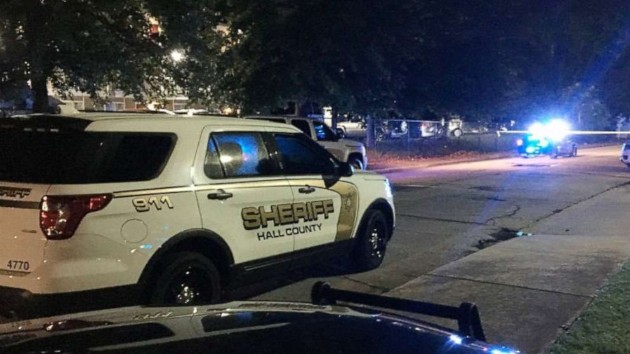 (ATLANTA) — A young Georgia sheriff’s deputy has left behind a 9-year-old son and 4-month-old son after he was gunned down in the line of duty Sunday night, authorities said.”He was always the type of individual that ran towards the danger and wanted to make thing better,” Sheriff Gerald Couch said.Deputies were trying to stop a stolen car believed to be involved in a gun theft when the suspects led them on a pursuit, Couch said at a news conference on Monday.The suspects got out of the car and fled, and Hall County Sheriff’s Deputy Nicolas Dixon followed one suspect behind a home, the sheriff said. After refusing to follow Dixon’s commands to show his hands, the suspect opened fire, Couch said.As Dixon returned fire, he was shot once below his ballistic vest, Couch said, and other deputies returned fire, hitting the suspect.Dixon, 28, was rushed by patrol car to Northeast Georgia Medical Center, where he died, the sheriff said.”There was too much damage… they were not able to save his life,” the sheriff said.Dixon is survived by his wife, his 9-year-old son and his 4-month-old son.”Such a young man with such a young family,” the sheriff said. “We will make sure that we take care of his family.”As Dixon was taken to the hospital, deputies tracked a second suspect who was hiding under a house in the same area; that suspect was taken into custody, Couch said.Investigators are seeking a felony murder arrest warrant for Hector Garcia, who is believed to be the shooter, the sheriff said. Garcia was shot at the scene by a deputy and hospitalized in unknown condition, the sheriff said.The final two suspects were taken into custody on Monday, the sheriff’s office said.Dixon had been with the department for three years and was a “beloved member” of the sheriff’s office of Hall County, which is about 60 miles outside of Atlanta, and “an outstanding deputy,” Couch said.”This is more than just a job — it is a passion. Not everyone can do this job. It takes a servant’s heart,” Couch said. “And they have to be able to realize that this job is inherently dangerous, and they may not come back home.”The deadly shooting prompted an outpouring of condolences from the governor and fellow law enforcement agencies.”Terrible news out of Hall County today,” Georgia Gov. Brian Kemp tweeted. “Our prayers are with the deputy’s loved ones as they mourn and local law enforcement as they work to catch the suspects.””Our hearts are with the family, blood & blue, of the Hall County Sheriff’s Deputy who paid the ultimate sacrifice in the line of duty,” officials with the Georgia Bureau of Investigation tweeted. “We thank you for your service and will continue to pray for your family, friends, and the Hall County Sheriff’s Office.”