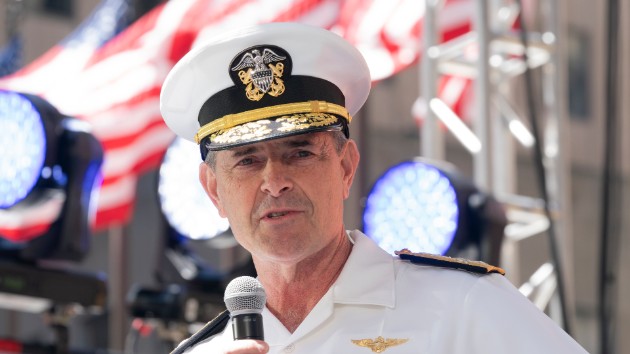 (WASHINGTON) — In a stunning development, William Moran, the man set to become the Navy’s next top admiral and a member of the Joint Chiefs of Staff, has instead chosen to retire because of his association with a former Navy public affairs officer investigated two years ago for inappropriate conduct.Navy Secretary Richard Spencer said Moran’s contacts with the former officer called into question his judgment. Confirmed by the Senate on May 23, Moran, a four-star admiral, was highly regarded and already serving as the deputy chief of naval operations, the Navy’s No. 2 admiral. He was slated to become the next chief of naval operations on Aug. 1.”Adm. Bill Moran recently brought to my attention that over the past two years he maintained a professional relationship with an individual who was held accountable and counseled for failing to meet the values and standards of the Naval profession,” said Spencer in a statement.”While I admire his faithful service and commitment to the Navy, this decision on his part to maintain that relationship has caused me to call his judgment into question,” he added. “Therefore, today I accepted Adm. Moran’s request to retire.”Moran admitted to continuing the relationship with the investigated officer, but said he didn’t approve of his actions.”I made this difficult decision based on an open investigation into the nature of some of my personal email correspondence over the past couple of years and for continuing to maintain a professional relationship with a former staff officer, now retired, who had while in uniform been investigated and held accountable over allegations of inappropriate behavior,” Moran said in a statement.”To be clear, my decision to maintain this relationship was in no way an endorsement or tacit approval of this kind of conduct,” Moran added. “I understand how toxic it can be to any team when inappropriate behavior goes unrecognized and unchecked. Every Sailor is entitled to serve in an environment free of harassment or intimidation.””As painful as it is to submit my request to retire, I will not be an impediment whatsoever to the important service that you and your families continue to render the nation every day,” said Moran. “I believe in the institution. And I believe I am doing right by it.”A senior defense official said that the officer Moran had been in contact with was retired Cmdr. Chris Servello, a former Navy public affairs officer. According to the official, Moran had been in contact with Servello for public affairs counsel.Servello was investigated by the Department of Defense’s inspector general for his actions during and after a 2016 Navy Christmas party, where dressed in a Santa suit, he slapped a woman’s backside and later made sexual advances on female junior officers. At the time of the incident, Servello was serving as the top spokesman for Adm. John Richardson, the Navy’s chief of Naval Operations.As a result of the investigation, Servello was given a non-punitive letter of reprimand and allowed to retire from the Navy.Last October, the inspector general found that Richardson had been too slow in removing Servello from his position. While the inspector general concluded that Richardson’s actions did not amount to misconduct, it asked Spencer to review his actions.In a statement issued at the time, Spencer said he was “completely confident” in Richardson’s abilities and he had done an “outstanding job.””We have reviewed and discussed his actions in this chain of events. What he has learned from this experience he will pass on to the next generation of leaders, making the Navy even stronger,” Spencer said.With Moran’s withdrawal and retirement, Richardson will remain as the chief of naval operations until a successor is recommended and confirmed by the Senate.”I have a strong vision for the Department of the Navy — one that includes trust among Sailors, Marines, and Civilians and an urgent resolve by all to live up to the nation’s high standards for our Navy and Marine Corps,” Spencer said in a statement issued Sunday night. “Department leadership must reflect that vision, and there must be no doubt we are wholly committed to ensuring a culture and work environment where every person is treated with dignity and respect and free from hostile behavior of any kind.” Copyright © 2019, ABC Radio. All rights reserved.

‘The Connors’ dedicates live season four premiere to Norm MacDonald
Mom dying of ovarian cancer shares what she wants women to know about the deadly disease
Jada Pinkett Smith celebrates 50th birthday on ‘Red Table Talk’; ABC to adapt Baratunde Thurston’s ‘How to Be Black’
Ray J responds to rumors of a second sex tape with Kim Kardashian: “This ain’t cool”
Is It Time To Go All-In On The Raiders?
Billy Porter reveals why he wants to say “thank you” to Elizabeth Taylor