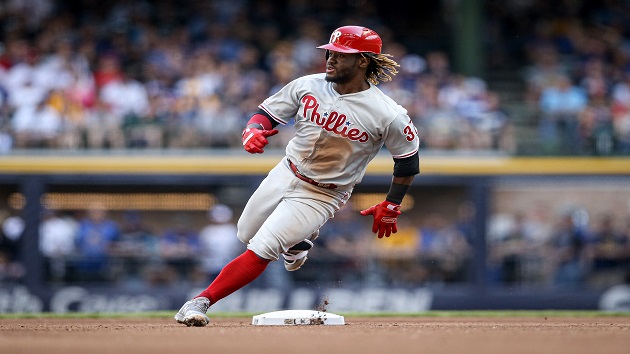 (PHILADELPHIA) — Domestic violence charges were dropped against Philadelphia Phillies outfielder Odubel Herrera on Wednesday, but MLB has handed down a stiff sentence regardless. Herrera was suspended Friday for the rest of the 2019 season — 85 games — as well as any possible postseason games.The 27-year-old was arrested on May 27 after an incident between he and his girlfriend at the Golden Nugget casino in Atlantic City, New Jersey. He was charged with simple assault after police responded to the scene and found the 20-year-old woman with “visible signs of injury to her arms and neck that was sustained after being assaulted by her boyfriend,” ESPN reported.The charge was dropped during a court appearance in Atlantic City on Wednesday after his girlfriend said she did not want to proceed with the case. He will be required to complete counseling as a condition of the charge being dropped.MLB conducted its own investigation of allegations of domestic violence against Herrera. The league is not beholden to criminal rulings, and said on Wednesday it would reevaluate Herrera’s case.”My office has completed its investigation into the allegations that Odúbel Herrera violated Major League Baseball’s Joint Domestic Violence, Sexual Assault and Child Abuse Policy,” MLB Commissioner Rob Manfred said in a statement Friday. “Having reviewed all of the available evidence, I have concluded that Mr. Herrera violated the Policy and should be subject to discipline in the form of an unpaid suspension that will cover the remainder of the 2019 season.”Herrera had been placed on administrative leave by MLB since the incident in May. The last game he played in was May 26.He issued a statement on Friday, saying he would not appeal the suspension.”Today, I accepted a suspension from Major League Baseball resulting from my inappropriate behavior,” Herrera said in a statement. “I acted in an unacceptable manner and am terribly disappointed in myself. I alone am to blame for my actions.”Phillies general manager Matt Klentak said Herrera had called him to apologize in the wake of the arrest.The outfielder was struggling badly at the time he was placed on leave. He was batting just .222 with one home run and 16 RBIs in 39 games this season. He also missed time in April with a hamstring injury.Herrera was an All Star in his second season in the league when he hit .286 with 15 home runs and 49 RBIs. He was signed out of Venezuela as a 16-year-old, eventually selected in the Rule 5 draft by Philadelphia and made his major league debut in 2015.He signed a five-year, $30.5 million contract before the start of the 2017 season. He was to make $5.35 million in 2019, but his suspension will be without pay. Copyright © 2019, ABC Radio. All rights reserved.