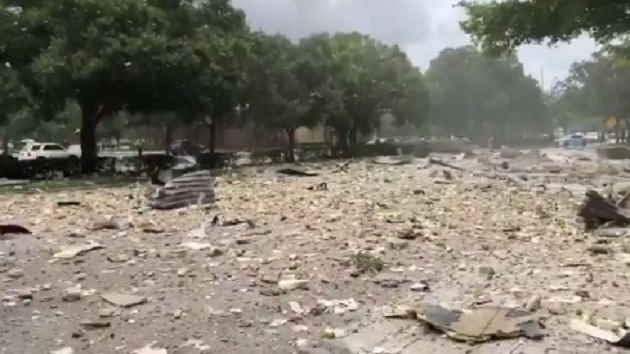 (PLANTATION, Fla.) — Police and fire crews are combing through the rubble of an explosion at a shopping center in Florida, officials said Saturday.About 15 to 20 people were injured, including two seriously, in the blast at The Fountains shopping center in Plantation, just outside of Fort Lauderdale, said Joel Gordon, Battalion Chief for Plantation Fire.Video shows windows blown out of an LA Fitness while a building next door appeared completely destroyed, with debris strewn in all directions.Ruptured gas lines were found in the rubble but it has not been confirmed if the explosion was caused by a gas leak, officials said.The origin of the blast, which went off just before 11:30 a.m. local time, is also not known.Thirteen people have gone to the Westside Regional Medical Center emergency room, a hospital official told ABC News.There were no fatalities and no reports of critical injuries, police said.”This could have been a lot worse,” Gordon told reporters.Guillermo Villa was across the street about to charge his Tesla SUV when he heard the explosion.Villa said he saw light and then a cloud of debris before “I started seeing pieces of the building falling on my head.””I went underneath my car because there was so much debris flying,” he told ABC News. “It was like raining pieces of roof, wall, bricks.”That’s when he saw people running and shouting.”I was afraid,” Villa said. “I thought it was a terrorist attack at the beginning.”But Villa said he’s grateful he escaped without a scratch.”It was so close … I am blessed,” he said. “I cannot believe nothing happened to me.”One witness told ABC Miami affiliate WPLG that a huge flash of light “lit up the whole sky.””It was loud,” the witness said. “This surpassed fireworks … your ears were ringing.”It just looks like an apocalypse,” she added.All businesses in the area are shut down until fire crews deem it safe to return, Plantation police said.