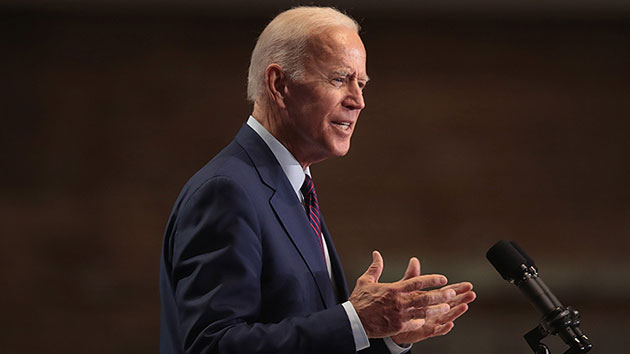 (SUMTER, S.C.) — Former Vice President Joe Biden apologized at a campaign event on Saturday for citing segregationist senators he once worked with as an example of his ability to work with others.Biden, who has positioned himself as the 2020 candidate best able to heal the country’s divide, has faced weeks of criticism for the remarks, perhaps most pointedly from the presidential debate stage by Sen. Kamala Harris.”Now was I wrong a few weeks ago, to somehow give the impression to people that I was praising those men who I successfully opposed time and again? Yes, I was.” Biden told a mostly black audience at a community in Sumter, South Carolina. “I regret it. I’m sorry for any of the pain or misconception that I caused anybody.”The apology goes back to comments Biden made at a New York fundraiser when the long-serving senator spoke about the need for consensus to fix the “broken” political system. He recalled when he served alongside former Sens. James O. Eastland of Mississippi and Herman Talmadge of Georgia — two avowed segregationists — and that the men were able to get along and find areas of agreement, despite their differences.”The point I’m making is you don’t have to agree. You don’t have to like the people in terms of their views,” Biden said, adding that Eastland called him “son,” rather than “boy” — a pejorative way that white segregationists addressed African-Americans.Appearing with Biden on the Democratic debate stage last week, Harris said she did not believe that Biden was a racist, but that it was hurtful “to hear you talk about the reputations of two United States senators who built their reputations and career on the segregation of race in this country.”New Jersey Sen. Cory Booker, another 2020 candidate, has also offered forceful criticism, telling ABC’s This Week that Biden had not fully grasped the impact his comments on the African-American community.”He is a presidential nominee, and to say something — and again, it’s not about working across the aisle, if anything I’ve made that a hallmark of my time in the Senate, to get big things done and legislation passed — this is about him invoking a terrible power dynamic that he showed a lack of understanding or insensitivity to by invoking this idea that he was called ‘son’ by white segregationists who, yeah, they see in him their son,” Booker said.Copyright © 2019, ABC Radio. All rights reserved.

Search continues for missing 6-year-old Isabella Kalua
2 being treated for gunshot wounds following shooting at Heritage High School in Virginia: Police
Over 200 companies pledge net-zero emissions by 2040 as pressure on private sector mounts
Pfizer says COVID-19 vaccine safe, effective for kids 5-11: What parents should know
Cynthia Erivo salutes Michaela Coel on her historic Emmy win: “Proud is an understatement”
Biden administration to ease restrictions on travelers to US in November