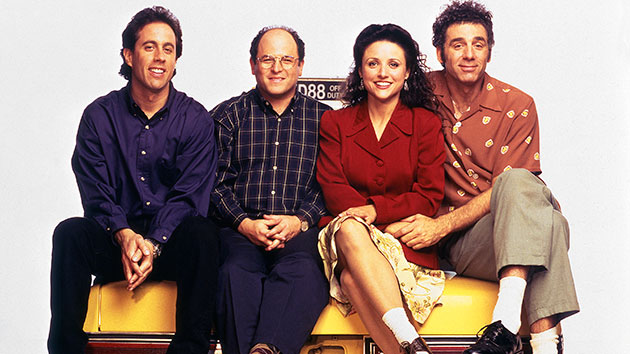 (NEW YORK) — Believe it or not, Seinfeld marks its 30th anniversary today, and after three decades, the so-called “show about nothing” has become a TV classic.

Now regarded as one of the biggest and most influential American sitcoms of all-time, Seinfeld featured show co-creator and stand-up comic Jerry Seinfeld — playing a fictionalized version of himself — engaging in the seemingly mundane events of everyday life, along with his friends: his self-absorbed ex-girlfriend, Elaine Benes; his bizarre neighbor, Cosmo Kramer; and his best friend and perennial loser, George Costanza — played respectively by Julia Louis-Dreyfus, Michael Richards and Jason Alexander.

Originally titled The Seinfeld Chronicles, the show, also co-created by Larry David, had an inauspicious debut. It wasn’t picked up by NBC until nearly a year after the pilot aired in 1989, and then was bounced around NBC’s schedule a few times.  While a critical hit, Seinfeld didn’t catch on with viewers until its third or fourth season.

Seinfeld broke with the traditional sitcom format by dispensing with a well-defined plot, instead building each episode on a running gag that somehow tied each character together in the end.  In the process, the show gave us a number of popular catchphrases, including “yada, yada, yada, “No soup for you!,” “Not that there’s anything wrong with that,” “sponge-worthy,” “Are you the master of your own domain?,” “double-dipping,” Festivus and “serenity now!”

Seinfeld’s series finale on May 14, 1998 drew an estimated 76.3 million viewers, making it the fourth most-watched regular series finale in U.S. TV history, behind M*A*S*H, Cheers and The Fugitive.

Seinfeld also won a number of awards during its nine-year run, including the Emmy for Outstanding Comedy Series in 1993, and Golden Globe the following year for Best TV-Series, Comedy.

While Michael Richards and Jason Alexander have had mixed success with their careers since the show ended, Jerry Seinfeld has since become a stand-up superstar, as well as host of the hit Netflix series, Comedians in Cars Getting Coffee.  But Julia Louis-Dreyfus has enjoyed the most high-profile post-Seinfeld success, winning seven Outstanding Lead Actress in a Comedy Series Emmys, six of them for her starring role in HBO’s Veep, which concluded May 12 after seven seasons.  She was also awarded the 2018 Mark Twain Prize for American Humor.