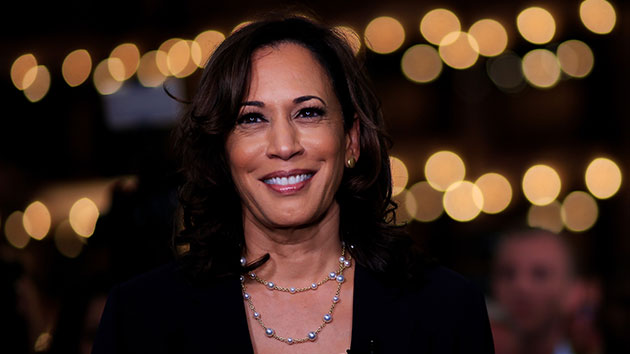 (NEW YORK) — Boosted by a debate performance that launched her into double digits in multiple polls and re-energized her campaign, Sen. Kamala Harris’ campaign announced Friday she raised $12 million from April through June this year, trailing behind some of her 2020 rivals’ massive hauls during the same period.According to a press release from her campaign, the $12 million sum comes in from 279,000 donors, 150,000 of which were new. The average donation was $39 and average online donation was $24.”The momentum Kamala Harris is seeing right now is buoyed by hundreds of thousands of grassroots supporters who believe in her 3AM Agenda to address the issues keeping people up at night,” said Harris campaign manager Juan Rodriguez. “As it has been from the beginning, this campaign is powered by the people. These resources will help expand Kamala’s growing strength in this primary and put her position to win the Democratic nomination.”Harris brought in more than $7 million through her digital program, including more than half a million dollars from its online store, which has sold 1,400 “That Little Girl Was Me” T-shirts featuring a photo of Harris as a young girl, a quote and an image that went viral after the presidential debate last week.During that debate, roughly 18 million viewers watched Harris challenge Biden on his claims of working with segregationists and his stance against busing to integrate schools decades ago, telling a personal story of being bused to school.”It was not only that but you also worked with them to oppose busing. There was a little girl in California who was part of the second class to integrate her public schools. She was bused to school every day. That little girl was me,” said Harris.According to the campaign, Harris raised $2 million in the 24 hours after the first debate, the most they have raised since launching in January, and another $1.2 million online over the weekend.Her second quarter campaign earnings are within range of the $12 million Harris raised during her first quarter, putting her behind South Bend, Indiana, Mayor Pete Buttigieg, who raised an eye-popping $24.8 million this quarter, and former Vice President Joe Biden, who raised $21.5 million in just the first 66 days since he launched his campaign in early May. Harris’ haul is also below Sen. Bernie Sanders’, who raised $18 million this quarter.A full campaign finance report to the Federal Election Commission will be released on July 15.Copyright © 2019, ABC Radio. All rights reserved.