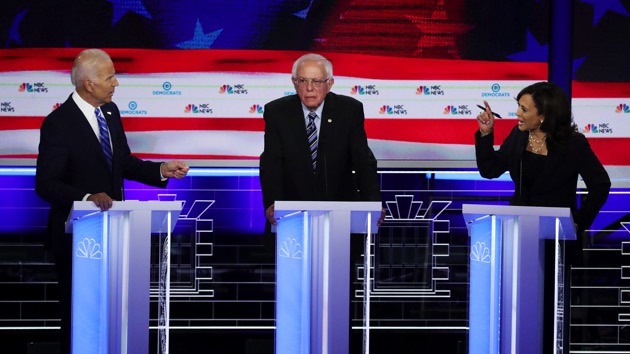 (NEW YORK) — It was a heated moment during the presidential debate last week that has continued to be at the center of two presidential hopefuls’ talking points on the campaign trail, and in a new interview, former Vice President Joe Biden admitted he took Sen. Kamala Harris’ shot at his past opposition to busing personally.”I was prepared for them to come after me, but I wasn’t prepared for the person coming at me the way she came out,” Biden said during an interview aired on CNN’s New Day program Friday morning. “She knew Beau and knows me.”Biden insisted Harris was taking his position on busing out of context without considering his record on civil rights, and reiterated his position that he was for voluntary busing.”It’s so easy to go back and go back 30, 40, 50 years and take a context and take it completely out of context,” Biden said. He added, “Busing did not work. You had overwhelming response from the African American community in my state — my state is the eighth largest black population in the country, as a percent of population — they did not support it.”Biden additionally said the debates should be focused around what candidates would do in the future, not about what they have done in the past, while he highlighted his civil rights records.”I get all this information about other people’s past and what they’ve done and not done, and, you know, I’m just not going to go there,” Biden said. He continued, “I mean, what we should be debating what we do from here.”Shortly after that part of interview was aired, Harris’ communications director Lily Adams also went on CNN, saying she didn’t think it was a personal attack and that presidential debates should include active discussions on candidates’ past actions as well as visions for the future.”She started off her comments in the debate by saying and affirming that she doesn’t believe that the vice president is racist and she’s always had respect for the vice president,” Adams said. “I can’t speak to why he was or wasn’t prepared. That’s for him and his team to decide and explain. What she was pointing out was a very real disagreement on the record. These are on decisions and actions that he made. This is what a presidential debate is. It’s to decide who has the record, who has the ideas, who has the vision to lead the party against this — against Donald Trump.”Asked if the extended squabble over busing is a distraction when it’s not at the top of any voters’ list of top priorities, Adams said, “Frankly, I don’t think you and I would be talking about it today if the vice president’s team hadn’t been attacking Sen. Harris over the weekend or Fourth of July holiday.”On Wednesday, Harris, who just a few days ago said, “there’s no question that the federal government has a role and a responsibility to step up,” implied a watered down position on busing that is closer to that of Biden’s, saying that busing students should not be a federal mandate, but should be a “tool” in the “toolbox” of school districts looking to desegregate their populations.The Biden campaign pounced on Harris’ more recent answer, accusing the Harris campaigns of attempting to avoid questions and being unclear about her position on busing.“It’s disappointing that Senator Harris chose to distort Vice President Biden’s position on busing — particularly now that she is tying herself in knots trying not to answer the very question she posed to him!” Biden’s Deputy Campaign Manager and Communications Director Kate Bedingfield tweeted.After a heated Twitter exchange between the Biden and Harris campaigns, Harris, during an interview in Des Moines, Iowa, said she is not in the same position as Biden on busing and that she has yet to hear Biden agree that the busing that was mandated in the era she was bused was necessary.On Friday afternoon, Biden and Harris, along with eight other fellow 2020 Democratic presidential hopefuls, will speak in front of nearly 7,000 educators in a National Education Association forum in Houston, Texas.Copyright © 2019, ABC Radio. All rights reserved.