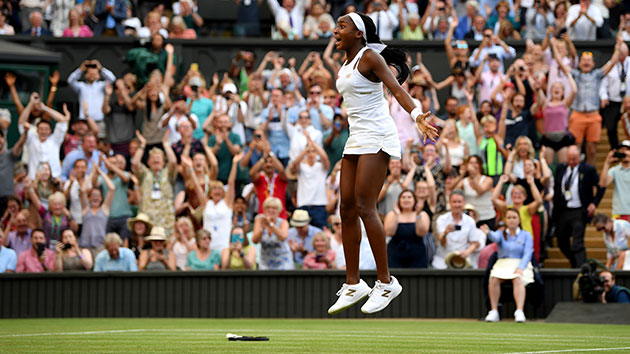 (LONDON) — Coco Gauff has gotten her ticket to Wimbledon’s second week after a comeback win Friday, on the game’s most storied and famed court.The 15-year-old phenom won her third round match, 3-6, 7-6 (7), 7-5, against Polona Hercog of Slovenia on Wimbledon’s Centre Court.Gauff staged a remarkable comeback, saving two match points in the second set, leading to a tiebreak.In her post-match interview with the BBC, Gauff said that she is not thinking about the tournament’s second week yet because of her mixed doubles’ match on Saturday.Gauff also joked about her comfort level on the Wimbledon courts.“People say Court 1 is my court,” she said. “But I guess Centre can be my court as well.”Gauff has taken the sports world by storm after defeating Venus Williams earlier this week.

“I remember before I played Venus,” Gauff recalled at her post-match press conference, “one little kid asked for a picture and then after the next day, after I played Venus, everyone was screaming my name so it’s just pretty surreal how life changes in a matter of seconds.”

Gauff said she does not find her wins to be a flash in the pan.

“I mean, I have won 3 matches now, so I think I have proved my own,” she said. “This moment is an incredible moment.”

She will be the youngest player to advance to Wimbledon’s Round of 16 since 1991. The Florida teen will face off against Simona Halep, the 2018 French Open winner, on Monday.

So far, Gauff has won over $200,000 for advancing to the fourth round. When asked what she would do with the money, the teen poked fun at her age.

“I mean, I can’t buy a car because I can’t drive,” adding that she might be buying some hoodies from Jaden Smith’s fashion line.

The Florida teen will face off against Simona Halep, the 2018 French Open winner, on Monday. The two have never played before.

“I watch her a lot, obviously,” Gauff said of her opponent. “I have never hit with her or anything, or practice with her, so I don’t know how the ball will feel when I actually play.”