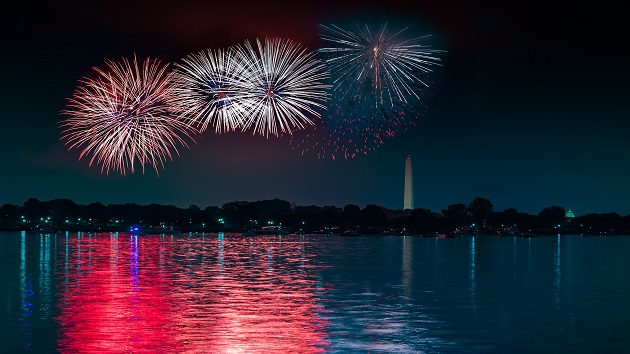 (WASHINGTON) — Parades, picnics and fireworks are hallmark features of July Fourth celebrations.The nation’s capital will still host its traditional National Independence Day Parade down Constitution Avenue and “A Capitol Fourth Concert” at the U.S. Capitol. There will be a dramatic reading of the Declaration of Independence outside the National Archives too.But this year, President Donald Trump decided to put his own spin on festivities in Washington that some say will politicize a national holiday.Called a “Salute to America,” the events will pay tribute to each of the nation’s five service branches with flyovers from military planes and a display of two 60-ton M1 Abrams tanks and two Bradley Fighting Vehicles. The celebration will conclude with a 35-minute fireworks display, the biggest the nation’s capital has ever seen.But the new events have prompted controversy and accusations that the president is turning a holiday into a “Make America Great Again” rally. Protests are planned against the president and a permit was granted for protesters to float a giant “Baby Trump” balloon. The now infamous inflatable grabbed headlines when Trump visited London in June.The president’s remarks, set to begin at 6:30 p.m., are not expected to be a political speech, according to a White House official, but instead “it’s about saluting America, our flag and our great armed forces.”However, tickets were distributed to allies of the president, including the Republican National Committee, the Trump administration and cabinet officials the week before the event. The Democratic National Committee was not given tickets.In a statement, the RNC defended their allotment of tickets to what is supposed to be a non-partisan event.”It’s standard practice for the RNC to receive a small number of tickets to events just as the DNC did under Democrat Presidents,” according to the statement. “This is routine for events like the White House Christmas Open Houses, Garden Tours in spring and fall, etc.”Concerns have also been raised about the costs associated with this year’s celebration. Event organizers at the Pentagon and Department of Interior haven’t revealed exactly how much money will be spent this Fourth of July on everything from the programming to security.The Washington Post reported that the National Park Service is using nearly $2.5 million in park entrance fees to cover costs, funds that would have been used to do repairs on the nation’s parks.But on Wednesday, the president said those costs would be “worth it” and tried to downplay the additional costs because “we own the planes, we have the pilots, the airport is right next door (Andrews), all we need is the fuel. We own the tanks and all.””Fireworks are donated by two of the greats,” Trump added.In the end, the weather may put a damper on the Washington events — forecasts call for thunderstorms on Independence Day. Still, a spokeswoman for the Department of Interior said that events will take place “rain or shine.””Visitor safety is always a top priority and we are working with our interagency and law enforcement colleagues to ensure the safety of all who attend, including in the event of inclement weather during the day,” Molly Block said in a statement.

More than 600,000 flags on National Mall stand witness to America’s COVID dead
Priyanka Chopra responds to growing criticism over ‘The Activist’: “The show got it wrong”
These vaccine mandates are already in place to attend school in the US
What to expect as FDA advisory panel debates Pfizer COVID booster shots
Derek Chauvin pleads not guilty in 2017 excessive force case involving 14-year-old Black boy
Happy Halloween! Snoop Dogg and Martha Stewart reunite to bring tasty treats with new food competition