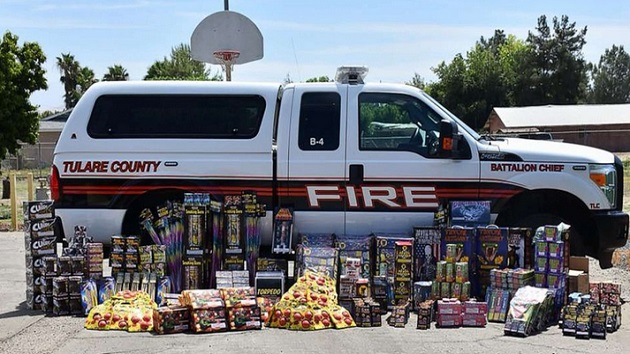 (VISALIA, Calif.) — More than 750 pounds of illegal fireworks were seized from a single residence in California ahead of the Fourth of July holiday, authorities said. Investigators executed a search warrant on a house outside the city of Visalia on Tuesday, after receiving a tip about “dangerous” fireworks that were brought into the area illegally over the past week “with the intent to sell,” according to a press release from the Tulare County Fire Department. They discovered 752 pounds of illegal fireworks at the residence and in vehicles on the property.One weapon was also recovered during the search.Two people were arrested for possession, transporting and selling fireworks that do not bear the California State Fire Marshal-approved “safe and sane” seal, according to the Tulare County Fire Department. Two others at the property were arrested for unrelated charges,Tulare County Fire Chief Charlie Norman said the illicit goods are worth about $25,000.”By this confiscation and arrest, I don’t know how many fires and safety issues we’ve prevented on the Fourth,” Norman told ABC Fresno station KFSN. Copyright © 2019, ABC Radio. All rights reserved.