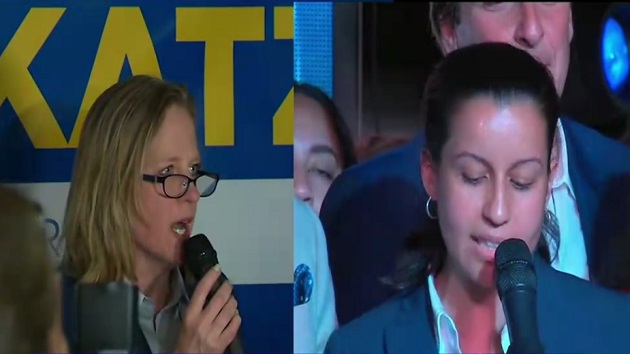 (NEW YORK) — The Democratic race for district attorney in Queens, New York, is now down to a razor-thin margin and will go to a hand recount.Tiffany Cabán, a 31-year-old public defender who was endorsed by New York Rep. Alexandria Ocasio-Cortez, declared victory on the night of the June 25 primary. But this week, as the local board of elections gathered to count several thousand provisional and absentee ballots, Cabán’s 1,100-vote lead evaporated and it appeared that Borough President Melinda Katz, who was endorsed of most of the party leadership, had pulled ahead by fewer than 50 votes.The close margin automatically triggers a hand recount, New York City Board of Elections spokeswoman Valerie Vazquez-Diaz said, according to local media reports. On Wednesday night, both campaigns issued statements saying they were confident they would prevail.“We said from the beginning that every vote needs to be counted and that every voter needs to be heard, and now we see clearly why this must always be the case,” Katz said in a statement Wednesday. “I am honored to be ready to serve as Queens’ next district attorney.”But Monica Klein, a Cabán spokesperson, made clear that the race, which has gained national attention as a test for progressives mounting challenges against establishment Democrats, was not over.”Queens voters are inspired by Tiffany Caban’s campaign and her vision for real criminal justice reform. If every valid paper ballot vote is counted, we are confident we will prevail,” Klein said in a statement.On Wednesday night the Cabán campaign pointed to the “strong ties between the Queens party machine” — which had lined up behind Katz — and the local board of elections, indicating they would challenge the invalidation of some 2,500 affidavit ballots. The board’s commissioners are recommended by political parties and confirmed by the City Council.Bill Lipton, the state director of the New York Working Families Party, which endorsed Cabán, also suggested there was a problem with the board’s invalidation of ballots.”We are going to fight to make sure every valid vote is counted and every voter has a voice,” he said in a statement that was also shared by the Cabán campaign. “And when all the votes are counted, we are confident Tiffany Caban will be the next Queens District Attorney.”The race comes just one year after Alexandria Ocasio-Cortez blindsided New York Democrats in a stunning defeat of Democratic heavyweight Joe Crowley, the longtime congressman seen as a potential successor to now-House Speaker Nancy Pelosi. Just days before the primary, Cabán won the endorsements of presidential hopefuls Elizabeth Warren and Bernie Sanders, and Ocasio-Cortez headlined a Cabán rally.Cabán also scored the endorsements of progressive prosecutors who have recently been swept into office in cities like Philadelphia and Boston, promising to reverse large-scale incarceration of largely black and brown people. Cabán often introduced herself as a “queer, Latina public defender,” saying she would “decriminalize” what she described as crimes of poverty.Katz positioned herself as a more moderate reformer whose deep ties across Queens would allow her to make lasting change.The candidate who wins will replace longtime Queens District Attorney Richard Brown, who died in May and left an open seat for the first time since he was elected in 1991. In heavily Democratic Queens, the Democratic candidate is the overwhelming favorite to win. Copyright © 2019, ABC Radio. All rights reserved.