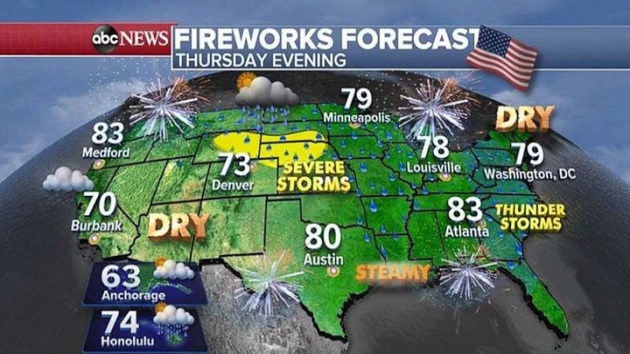 (NEW YORK) — There were 120 damaging storm reports across the country on Wednesday, including six reported tornadoes in South Dakota and Nebraska and flash flooding in Iowa and Wisconsin. More severe storms and heavy rain are expected on the Fourth of July.Severe storms are likely Thursday in six states: Wyoming, South Dakota, Colorado, Nebraska, Kansas and South Dakota. These areas will see damaging winds, hail and a few tornadoes.Scattered strong storms are expected not only in the Plains, but also in the western Great Lakes, Ohio Valley and into the Mid-Atlantic and the Southeast. Lightning, gusty winds and flash flooding are the biggest threats with these storms.More storms are expected from the Plains into the Mid-Atlantic and the Southeast through the holiday weekend, including Friday, Saturday and Sunday.Some areas could see more than 3 inches of rain in a short period of time, which could cause flash flooding.In addition to the strong to severe storms, very hot and humid conditions are expected from the Mid-Atlantic to Florida and into the Southern Plains.The highest heat and humidity will be in the Southeast, from Georgia to Florida, where a heat advisory has been issued. At times it could feel like it’s nearly 110 degrees in the region.

Police resume search for Brian Laundrie, boyfriend of missing 22-year-old Gabby Petito
The FDA panel decision on vaccine boosters shows the process worked: Fauci
A family promise led her to Mount Cristo Rey, the site of a pilgrimage for those seeking a miracle
How LA County countered recall-election disinformation in real time on social media
Texas abortion ban puts spotlight on medication abortions
Latinos in sports are drawing on their heritage to inspire others