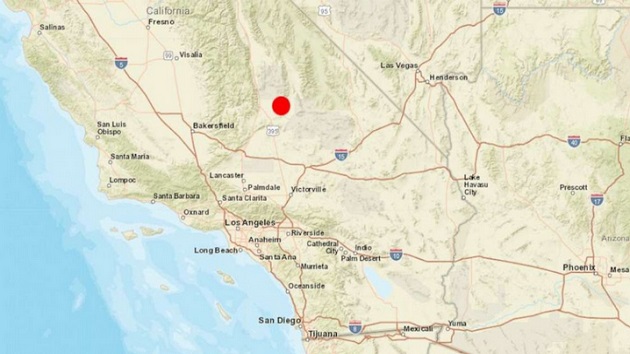 (LOS ANGELES) — A powerful earthquake with a preliminary 6.4 magnitude rocked Southern California on Thursday, marking the strongest earthquake in the region since 1999, officials said.”We will continue to have a lot of aftershocks,” seismologist Dr. Lucy Jones warned at a news conference following the quake.A magnitude 5 aftershock is likely, Jones said.

The Fourth of July quake, which struck at about 10:30 a.m. local time, was centered in a remote area near Searles Valley in the Mojave Desert, about 150 miles northeast of Los Angeles.

In Kern County, the quake sparked evacuations at Ridgecrest Regional Hospital and several apartment buildings, officials said.Kern County officials also reported fires near Ridgecrest.In San Bernardino County, the quake broke water mains, downed power lines, cracked buildings and caused rock slides on roads, officials said. No injuries or fires were reported in San Bernardino County, officials added.Los Angeles saw no injuries or significant damage, the fire department said.But Angelenos noted how rare it was to feel such a long quake.Director Ava DuVernay tweeted, “Been living in Los Angeles all my life. That was the longest earthquake I’ve ever experienced. Not jerky. Smooth and rolling. But it was loooong. It was so long I thought for the first time ever ‘Is this the big one?"””This was a strong one,” the LAPD tweeted, “and a good reminder to be prepared.”A tweet from the Los Angeles International Airport said no runways were damaged and the airport was operating as normal.The quake was even felt around Las Vegas, though police there said no damage was reported.A tsunami is not expected, according to the National Tsunami Warning Center.”This is an isolated enough location that that’s going to greatly reduce the damage,” Jones said at a news conference.She added, “This is a large enough earthquake that it probably did break through to the surface of the earth.”