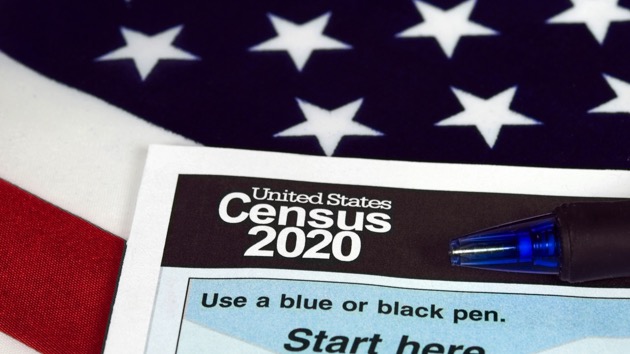 (WASHINGTON) — A day after the Justice Department announced that the 2020 census would be printed without the citizenship question President Donald Trump wanted, he insisted on Wednesday that the effort to add the question is “absolutely moving forward.”

The News Reports about the Department of Commerce dropping its quest to put the Citizenship Question on the Census is incorrect or, to state it differently, FAKE! We are absolutely moving forward, as we must, because of the importance of the answer to this question.

The Commerce Department did not immediately respond to a request for comment. The Justice Department was expected to issue a statement later Wednesday.The Census Bureau had previously set a target date of early July to begin printing the questionnaire in order to have it prepared for delivery to the American public by the April 1 deadline.

Every person in every community should be counted in the Census. This is a welcome development for our democracy — one that was achieved thanks to the hard work of countless Americans. https://t.co/ESlBdnd8q6

Rep. Jamie Raskin, the Chairman of the Subcommittee on Civil Rights and Civil Liberties at the House Oversight Committee announced Wednesday afternoon that the Director of the U.S. Census Bureau, Dr. Steven Dillingham, will testify at a hearing on July 24, 2019, on the status of planning and preparations for the 2020 Census.“It is time for the Census Bureau to move beyond all the outside political agendas and distractions and devote its full attention to preparing for the 2020 Census,” Raskin, D-Md., said. “This hearing will examine the current status of the Bureau’s readiness for the Census next year—especially in areas where the Bureau may be falling behind such as IT, security and public education.”Raskin expressed concern that testimony from the nonpartisan Government Accountability Office shows the Census Bureau is at risk of missing key milestones, ‘including partnership specialist hiring and the correction of high-risk security vulnerabilities, and lacks a proper system for tracking and implementing crucial security recommendations from the Department of Homeland Security.” He also doubted the Bureau’s reliance on new technological methods for conducting the count that he believes are undertested and potentially vulnerable to security breaches.On Monday, Trump said he was still “looking at” the possibility of trying to delay the census from being printed after the Supreme Court ruled last Thursday to block the administration from adding the question to the 2020 questionnaire.Legal experts argue that the president doesn’t have the constitutional power to do so, pointing to Article 1, Section II of the Constitution, which grants Congress the authority for conducting and overseeing the census. Title 13 of the U.S. Code delegated that authority to the Commerce Department but outlines specific procedures they have to follow under law, like the date that the census must be delivered.”The census is set by statute so he doesn’t have the unilateral authority to delay it,” Kelly Percival, counsel at the Brennan Center for Justice told ABC News last week.In an email to plaintiffs of the case Tuesday, DOJ trial attorney Kate Bailey said “the printer has been instructed to begin the printing process.”The Supreme Court’s ruling last week seemed to leave open the possibility that the administration could make another attempt to add the question, if it provided a different explanation, after Chief Justice John Roberts said the Commerce Department’s initial rationale “seems to have been contrived.””I respect the Supreme Court but strongly disagree with its ruling regarding my decision to reinstate a citizenship question on the 2020 Census,” Commerce Secretary Wilbur Ross wrote in a statement on Tuesday. “The Census Bureau has started the process of printing the decennial questionnaires without the question. My focus, and that of the Bureau and the entire Department is to conduct a complete and accurate census.”Copyright © 2019, ABC Radio. All rights reserved.