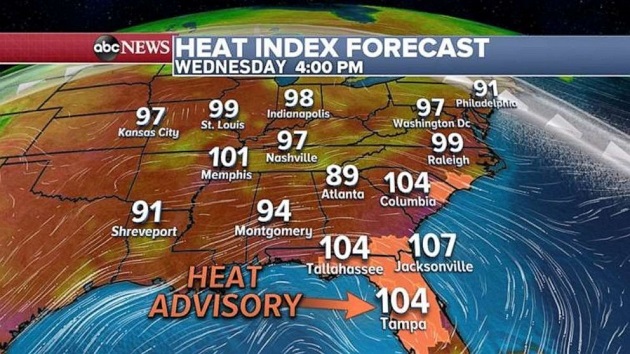 (NEW YORK) — Six of the last seven days the temperatures at Chicago’s Midway airport have reached at least 90 degrees, with Tuesday’s high of 92 being the hottest there so far this year. Other notable temperatures on Tuesday included a high of 98 in Miami. On Wednesday, a heat advisory has been issued for much of the Southeast as the Heat Index could approach 110.The Fourth of July is forecast to be similarly scorching, with humidity creating conditions that feel like at least 100 degrees from the Plains and Gulf Coast all the way to the East Coast.In addition to the heat, storms with heavy rain are a possibility for several regions.Parts of the Plains and East Coast could see more than 3 inches of rain and localized flooding over the holiday weekend.

Could Jason Sudeikis return to ‘SNL’ as the first host of the new season?
Over 200 companies pledge net-zero emissions by 2040 as pressure on private sector mounts
At least 43 people shot, six fatally, in violent Chicago weekend
‘Shang-Chi and the Legend of the Ten Rings’ three-peats at #1 with $21 million weekend
More evacuations ordered in California as wildfires threaten giant sequoia trees
‘Ted Lasso’? ‘WandaVision’? ‘Mare of Easttown’? Who will clean up on Sunday’s Emmy night?