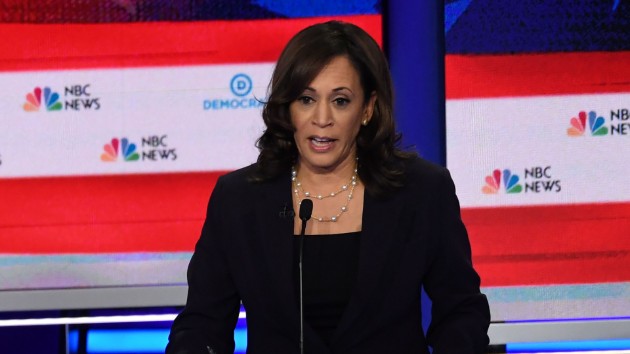 (NEW YORK) — A wide advantage in perceived electability boosts Joe Biden in the race for the Democratic presidential nomination, but he lags in having new ideas, is challenged by Bernie Sanders and faces a debate-energized Kamala Harris in a new ABC News/Washington Post poll.In current preferences, 29% of Democrats and Democratic-leaning independents support Biden and 23% favor Sanders, with 11% apiece for Harris and Elizabeth Warren. The number of undecided potential voters has dropped sharply after the first debates, with gains in support for each of these candidates. Others are in the low single digits, at best. See a PDF with the full results, charts and tables.Given the time to register to vote in advance of the caucus and primary season, these results are among all leaned Democrats. Among those who are registered now, Biden goes to a 30-19% advantage over Sanders, with 13% for Harris and 12% for Warren.Crosscurrents underlie candidate preferences in this poll, produced for ABC by Langer Research Associates. A broad plurality, 45%, says Biden has the best chance to beat President Donald Trump in the general election, but only 18% say he has new ideas, trailing Sanders, Warren and Harris alike. At the same time, 41% say Harris stood out in her debate performance, easily the leader in this gauge, a wide 15 to 22 percentage points ahead of Biden, Sanders and Warren. And among those who actually watched both Democratic debates last week, the number picking Harris as a standout performer soars to 72%, well above any of her competitors. An impact is apparent: among the half of leaned Democrats who did not watch either of the two nights of debates, just 5% support Harris for the nomination. Among those who watched the debate in which she appeared, by contrast, her support swells to 20%. That places her numerically second among Thursday-night viewers; Biden has 28% support in this group; Warren, 17%; and Sanders, 15%.Warren also does better among viewers of her debate than non-viewers, 17 vs. 8% support. Showing strength among highly engaged leaned Democrats, she reaches 22%, virtually matching Biden’s 25%, among those who watched both debates.There’s no meaningful difference in Biden’s support across debate-watching groups, and Sanders gets the booby prize — higher support among those who did not watch the debates, 26%, vs. 15% among those who watched the debate in which he appeared and 10% among those who watched both nights. Comparative inattention fits with his younger support profile; 18- to 29-year-olds, his best support group, are least likely to have tuned in.These results are from a question in which respondents were read a list of Democratic candidates. Asking preferences in an open-ended format produces similar results (25-18-9-9%, Biden-Sanders-Harris-Warren), with gains for each in comparison with April — Biden +8 points, Sanders +7, and Harris and Warren both +5. Those with no opinion dropped sharply, 35% in April compared with 19% now (and 6% when the full list is read).In another measure, intended participation is high: Seventy-two percent of leaned Democrats say they’re certain to vote in their state’s primary or caucus. That’s up from 56% in November 2015, when it was first asked in the last cycle, a race that pitted just two prime candidates. Current results are similar to what they were in November 2007, the last crowded (albeit not this crowded) Democratic race. Copyright © 2019, ABC Radio. All rights reserved.