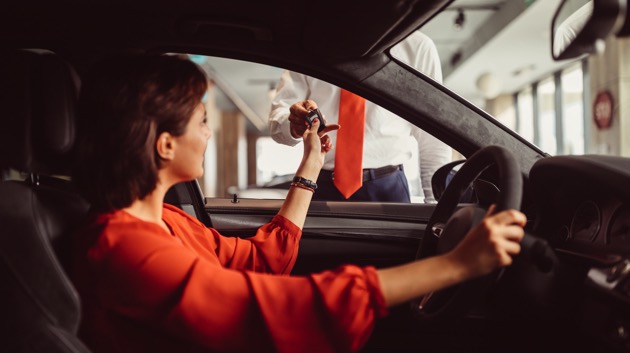 (NEW YORK) — Sales of automobiles in the U.S. are in a slump. Could women be the answer to the industry’s woes?Automakers that may have once struggled to connect with female buyers are increasingly looking to attract more women into showrooms with vehicles that offer more safety features, ergonomic controls in the cockpit and higher fuel economy.“Women are a massive segment — half of the population,” Jessica Caldwell, Edmunds’ executive director of industry analysis, told ABC News. “How do you target women? That’s what automakers are asking.”Industry insiders expect 16.9 million vehicles will be sold this year, down from 17.3 million units in 2018. Auto sales in the first half of 2019 have fallen 2.3 percent versus 2018 and 2019 is on track to be the first year since 2014 where sales fail to hit the 17 million vehicle mark.But the fact that women are marrying later in life or remaining single have put more women in the driver’s seat when it comes to buying cars, creating a significant opening for sellers.Sixty-two percent of all new cars sold in the U.S. are bought by women, according to research from Cars.com, which also found that women influence more than 85 percent of all car purchases.“Women have been more important to the industry for decades than the industry has recognized,” Erik Gordon, a professor of business at the University of Michigan, told ABC News. “The industry has been slow to recognize the buying power of women. Why? Because the industry has been run by men and car guys.”He went on, “Car companies that catch on with women will have a real sales advantage. It’s time for car companies — and dealers — to wake up.”Gordon said he expects automakers to continue to cater to women’s needs in the coming years.“Displays will be different in cars because of women. We’ll see the simplicity of gauges, less of the tachometer,” he said. “Women are less impressed with horsepower and high-speed handling. They want cars that look nice. Styling is important.”Women are less likely to choose masculine vehicles like high performance sports cars, muscle cars and trucks. Instead, they’re springing for compact SUVs and sedans. The most car popular searches by women on Cars.com are the Honda Civic, Honda Accord, Chevrolet Equinox, Ford Escape and Nissan Altima.Unlike men, women don’t make buying decisions purely based on make and model, said Cars.com CEO Jenni Newman. Instead, their concerns are practical: How much cargo space is available? How comfortable are the seats? Is the vehicle reliable over the long haul?Women are also more likely to ask their social networks for ideas as they try to decide on the right purchase, Newman said, a trend that has not gone unnoticed by carmakers.“I see a lot of automakers going to different publications — lifestyle magazines and social media — to present their cars,” she told ABC News.Indeed, industry watchers say that female buyers are being considered at every stage of the manufacturing and selling process.Rebecca Lindland, an independent auto analyst, said she’s seen a dramatic shift in the advertising of vehicles to women, including ads that leave out men altogether. But that approach has its risks.“It’s very tricky to market specifically to women without alienating men,” Lindland told ABC News.Or, as Caldwell, the Edmunds analyst, said: “Women feel comfortable driving a car marketed toward men. But guys don’t want to drive a chick’s car.”The shift is also reflected in hiring. Women engineers are being put in charge of designing SUVs and pickup trucks. Dealerships are actively recruiting female sales associates.Jeff Schuster, an analyst at LMC Automotive, told ABC News that the stereotype of car dealerships as boys’ clubs has been recognized as outdated.“The industry has been slow to recognize the buying power of women,” he said. “Having more female sales people is changing the culture at dealerships.”Luxury British automaker Aston Martin has made a concerted effort to reach wealthy female drivers. It established a female advisory board to work in conjunction with the marketing, engineering and design divisions of the company. The eight female members act as a “sounding board” for products and business decisions, according to Laura Schwab, president of Aston Martin the Americas. The company also relied heavily on the feedback the board offered on the interior of the DBX, Aston’s first SUV.Schwab said Aston hosts many female-focused events throughout the year and she makes a point of attending them all.”We’re bringing women together as a community around the Aston brand and their love of cars,” she told ABC News. “We are trying to create exposure for the brand. We have seen these events translate into sales.”Kim McCullough, vice president of marketing at Jaguar Land Rover North America, said the new Range Rover Evoque, a compact SUV, was designed specifically for women.Females accounted for 40 percent of Evoque sales for the 2014 model year. That number jumped to 60 percent four years later. One reason women gravitate toward the SUV? Better stowage and practicality, according to McCullough.“Small luxury SUVs are easy to maneuver,” she said. “They also offer increased height and visibility, making it easier to see on the road.”At German automaker Audi, 40 percent of owners are female. The Q3 SUV, which got a redesign this year, attracts more women than men, with women accounting for 65 percent of sales.“Women are extremely important to Audi,” Barry Hoch, director of product planning at Audi of America, told ABC News. “We’re constantly getting feedback from women buyers.”Women have inspired Audi engineers to rethink parts of the vehicles, like the adjustable head rests and seat belts, door handles and run-flat tires.“The buyer perspective they give helps Audi make better cars for everyone without question,” Hoch said.Copyright © 2019, ABC Radio. All rights reserved.