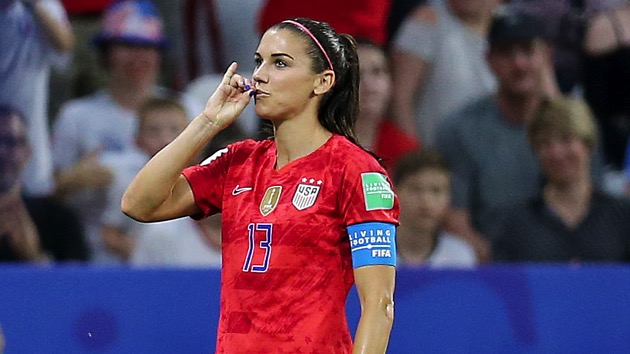 (LYON, France) — Another win for the U.S. women’s national team, another round of calls of “arrogance.”In what has become a theme throughout this World Cup for the defending champions, critics are once again complaining that the American athletes were too celebratory about winning.This time around, it was a goal scored by captain Alex Morgan in the semifinal match against England Tuesday.About 30 minutes into the match, the U.S. was tied 1-1. That’s when Morgan ran toward the goal and used her head — literally — to put the U.S. in the lead.

As athletes are wont to do, she celebrated. And as athletes are also wont to do, she celebrated with swagger.Morgan ran to the sidelines, stood up straight, and mimicked taking a sip of tea, seemingly a dig at her English opponents or a reference to the meme of sipping tea (i.e. shrewdly “rising above” gossip) — or both.Some weren’t exactly tickled by it.Lianne Sanderson, a former member of the English World Cup team, called it “distasteful” on an appearance on beIN Sports. She added, “We love our tea in England. I’m not a tea drinker, but that’s what we’re connected with, so I think it’s a little bit distasteful.””I wish I was on the pitch to put in a tackle,” former English captain Faye White put it more bluntly on Good Morning Britain.Meanwhile, the country that gained independence from Britain 243 days ago this Thursday seemed pretty proud.

There’s a lot of confusion and anger around Alex Morgan’s goal celebration today. Let me clarify. She was sipping tea, which is made from leaves, which you find on a tree, which has branches, like the US government, which exists because England lost the Revolutionary War.

You know what was distasteful? The Stamp Act https://t.co/cUinC9eVO2

The PK wasn't the strongest and Naeher lept appropriately to save it. And that's how it goes. #ENGUSA

Even Hillary Clinton got in on the fun, congratulating the team “for earning that tea.”For her part, Morgan, who also celebrated her 30th birthday Tuesday, had her tea and sipped it, too.”This team is special. Thanks for the bday love. Thanks for the rocking stadium. Thanks for continuing to believe with us. And that’s the tea,” Morgan tweeted (here, “the tea” refers to “the gossip”).

This was far from the first time the Americans have been criticized for having too much fun winning.Before Tuesday’s match, they faced calls of “arrogance” from British tabloids, and before their June 28 match, the president of the United States had accused star Megan Rapinoe of overconfidence.Rapinoe responded to that by scoring the U.S.’s two goals in the June 28 game, celebrating the second one with a pose in which her arms were defiantly in the air. Again, critics cried arrogance.In the U.S.’s first match of the tournament, they scored 13 goals over Thailand. People criticized them for continuing to celebrate after each goal.”It’s like, we’re at the World Cup. What do you want us to do?” Rapinoe said in response to the outcry over Morgan’s tea cup pose, according to Wall Street Journal reporter Rachel Bachman. “We work hard, we like to play hard.”The athletes play in the finals on Sunday at 11 a.m. ET.Copyright © 2019, ABC Radio. All rights reserved.