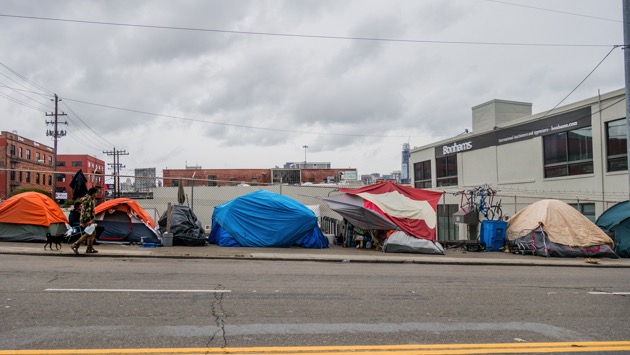 (NEW YORK) — President Donald Trump in an interview with Fox News painted a dark picture of people “living in hell” due to homelessness in major U.S. cities, claiming that it is “a phenomenon that started two years ago,” blaming Democratic mayors for the problem.“We may intercede,” Trump said. “We may do something to get that whole thing cleaned up.”The sit-down interview with Fox News host Tucker Carlson that aired Monday night was taped during Trump’s recent visit to Japan. During the interview Carlson asked the president about Japanese cities which he said are clean, have no graffiti and there is “no one going to the bathroom on the streets.” By contrast, Carlson noted that American cities including Los Angeles, Washington, D.C., and San Francisco have a problem with what he called “filth.”He pointed to the “liberal establishment” and sanctuary cities run by “very liberal people” to blame for this crisis.“It’s a phenomenon that started two years ago. It’s disgraceful,” Trump said in response, seeming to refer to when he took office in 2017.According to data from the Department of Housing and Urban Development, homelessness overall has decreased by 15 percent since 2007. Between 2016 and 2018, the rate of homelessness has stayed between 550,000 to 553,000 per year, the HUD figures show.Trump then shifted the conversation to police officers, which he said are getting “very sick” while walking their beats and office workers headed down sidewalks to their jobs.“We have to take the people and do something. We have to do something,” Trump said. “That’s not really the kind of work that the government probably should be doing. We never had this in our lives before in our country.”While Trump said that he has been fighting this problem in Washington, D.C., and is looking into addressing homelessness in other cities, he gave no specifics.Copyright © 2019, ABC Radio. All rights reserved.

Angela Bassett is amazed by her Madame Tussauds wax figure: “Oh Lord! I’m a twin!”
Tyra Banks defends Olivia Jade ahead of her ‘Dancing with the Stars’ debut: “Olivia is so brave”
Now you can own James Bond’s DB5 — the book, that is
Shannen Doherty says breast cancer is “part of life”: “I never really complain”
Where is Dulce Maria Alavez? Age-progression photo released two years after her disappearance
‘﻿Blue Bayou’﻿ shines a light on this issue that many have “no clue” about