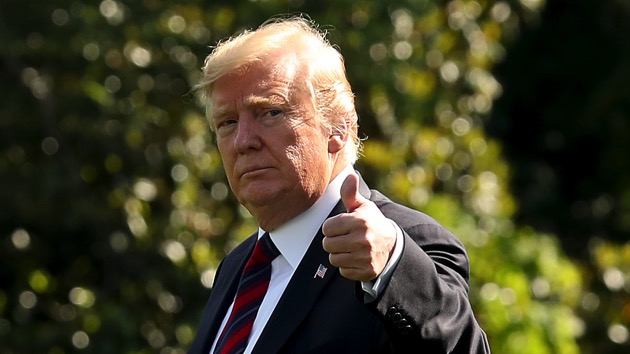 (WASHINGTON) — President Donald Trump’s re-election campaign and the Republican National Committee said on Tuesday they raised a whopping $105 million for the second quarter of 2019 as they strive to hit their ambitious $1 billion goal for the 2020 race.The staggering number comes from the joint fundraising committee between the campaign and the RNC — the Trump Victory Committee — which says it currently has $100 million in cash on hand.The Trump campaign and the RNC also said they raised more money online in the second quarter than the first. The Trump campaign and committees said they raised $54 million for the quarter, while the RNC brought in $51 million.According to sources in the campaign, this massive chunk of change on hand provides them enough resources to not only expand in states the president must win in 2020, but it also gives the campaign “playing money” to dip into states like New Mexico, Nevada, Minnesota and even Oregon where they believe there’s a chance to make in-roads in states the president lost in 2016.For Q1 back in April, the Trump campaign raised $30 million with $40.8 million cash on hand.Trump campaign manager Brad Parscale said the massive haul was “a testament to the overwhelming support” for the president. “No Democrat candidate can match this level of enthusiasm or President Trump’s outstanding record of results,” he added.”The RNC’s record-breaking fundraising has allowed us to identify troves of new supporters online and continue investing in our unprecedented field program,” said RNC Chairwoman Ronna McDaniel. “Our grassroots army is already hard at work–putting us in prime position to re-elect President Trump and Republicans across the country.”The numbers were first reported by The New York Times. The campaign did not disclose the number of individual donations, which will be included in the official report set to be filed with the Federal Election Commission by July 15.The Q2 numbers continue to show a stark difference from President Trump’s 2016 run in terms of attracting donors, when the billionaire businessman largely relied on his own money and small dollar donations for his insurgent initial run.By comparison, during the second quarter of 2011, former President Barack Obama’s second presidential campaign raised $46.3 million and the Democratic National Party raised more than $30 million, according to disclosure reports filed to the Federal Election Commission.And with the Trump campaign and RNC saying they have $100 million in cash on hand, with just under 500 days before Election Day, the power and advantage of running as an incumbent is clearly something Democrats will have to scramble to make up for once they sort out their 20-something person primary field—who are all currently fundraising without the help of the party committee, unlike the president.Mayor Pete Buttigieg revealed on Monday that his campaign took in $24 million for Q2, a number the Trump campaign scoffed at. “That’s a pretty good 24-hour haul for us Mayor Pete, good job,” Trump campaign communication’s director Tim Murtaugh told ABC News.However, Buttigieg’s campaign took in its $24 million in Q2 without help from the Democratic National Committee. While the Trump campaign raked in nearly $25 million in 24 hours after the president’s 2020 kick-off in June with the advantage of running as an incumbent with the RNC’s full backing.”Sen. Kamala Harris’ campaign said they raised $2 million in the 24 hours after the first democratic debates last week.In terms of spending, the Trump campaign and the RNC invested $35 million into their digital and email efforts in Q2, which shows a 150 percent increase year-over-year from 2018.Copyright © 2019, ABC Radio. All rights reserved.