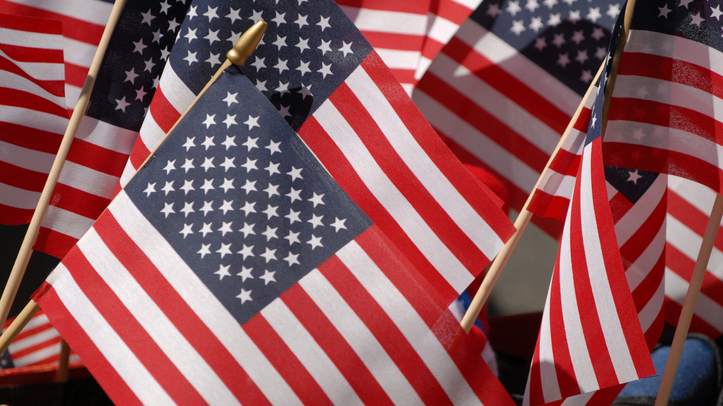 (WASHINGTON) — Two M1 Abrams tanks and two Bradley Fighting Vehicles were to be moved into place Tuesday night to be on “static display” during President Donald Trump’s “Salute to America,” a defense official told ABC News, as part of the president’s effort to re-shape the annual July Fourth celebration on the National Mall.Suitable locations around the Lincoln Memorial that can bear the tanks’ 60-ton weight were being looked at as possible locations, another defense official told ABC News.Trump was set to give a speech at 6:30 p.m. on Thursday in front of the Lincoln Memorial highlighting the U.S. military and multiple fighters and other aircraft were preparing for flyovers above the Mall during the president’s remarks.Trump tweeted Tuesday that “The Pentagon & our great Military Leaders were thrilled to be doing this.””The Pentagon & our great Military Leaders are thrilled to be doing this & showing to the American people, among other things, the strongest and most advanced Military anywhere in the World. Incredible Flyovers & biggest ever Fireworks!” President Trump tweeted on Tuesday.But one thing that’s not known is how much the military’s participation will cost taxpayers. Officials are saying little and congressional Democrats have complained their questions aren’t being answered.The flyovers will include the Navy’s Blue Angels flight demonstration team as well as other aircraft from the Navy, Air Force and Marine Corps. That includes one of the Boeing 747s that serves as Air Force One and the public’s first look at the new version of the Marine One helicopter that is not yet on active duty.Typically, the costs associated with military flyovers at civilian events are said to be covered by annual training budgets, but for now there’s no real estimate for what the final tab will be for the military’s participation in the July Fourth events.”The cost to DoD for support to the Salute to America is undetermined at this time,” said Lt. Col. Chris Mitchell, a Pentagon spokesman. “The DoD will collect all associated cost data from the individual services.”On hand for Trump’s event at the Lincoln Memorial will be some of the nation’s senior military leaders, including some of the members of the Joint Chiefs of Staff, according to a defense official.But the military’s role in the event has garnered criticism from one veterans group.”No political candidate or party, no government office and no elected official should co-opt Independence Day for partisan agendas,” Jeremy Butler, the CEO of Iraq and Afghanistan Veterans of America, wrote in Time magazine.”In our increasingly divided society, Independence Day is one where all Americans can celebrate the great gift of our freedom together. To cheapen that gift with partisan actions dishonors the sacrifices of men and women who protect that freedom with their lives.”At the same time, the Veterans of Foreign Wars has not seen many complaints on its social media platforms“I can’t speak for VFW’s huge membership but on behalf of the National Organization we are not going to judge how the President of the United States chooses to celebrate Independence Day, which is one of only three military holidays (along with Memorial Day and Veterans Day),” said Joe Davis, the VFW’s Director of Communications and Public Affairs.Most of the military aircraft participating in the flyovers will be making roundtrips to the Washington, D.C., area from their bases. They include Air Force F-22s, an Air Force B-2 Stealth bomber from Whiteman Air Force Base in Missouri, the 747 that serves as Air Force One from Joint Base Andrews, Maryland, two Navy F/A-18Es from Oceana Naval Air Station in Virginia, 2 Marine MV-22s from Quantico, Virginia, and the new Marine One VH-92 that isn’t in service yet and will be flown by its manufacturer, Sikorsky.However, two Navy F-35C Joint Strike Fighters will fly cross country from Lemoore, California, to be in place ahead of Thursday’s events.The military will likely call the transport of the armored vehicles and the use of military aircraft flying above the nation’s capital as training missions, the rationale being that the aircraft would be flying training missions anyway.This is the standard used for dedicating specific aircraft to fly over major sporting events like the Super Bowl.The military services include the costs of training flights into their annual budgets, so no extra costs will likely be incurred for those aircraft flying to the D.C. area from bases across America.For example, the entire B-2 Stealth bomber fleet is stationed at Whiteman Air Force Base in Missouri. The aircraft’s round trip flight to Washington and back will be covered by training budgets, including the plane’s $122,000 per hour flight cost that includes the cost of fuel, the flight and overhaul costs for the aircraft and its engine.After all the talk about the military’s role and its preparations for the new July Fourth celebration, it may all come down to the weather. As of Tuesday evening, weather forecasts called for a 50 percent chance of thunderstorms on Thursday night in the Washington, D.C., area.Copyright © 2019, ABC Radio. All rights reserved.