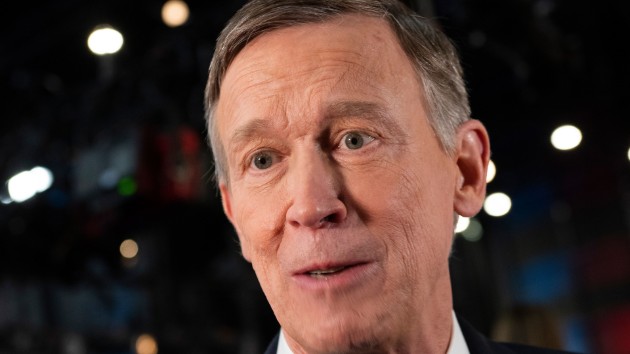 (WASHINGTON) — At least six key aides to John Hickenlooper have confirmed they’re leaving his campaign or intend to do so in the coming weeks.Brad Komar, campaign manager; Dan Sorenson, national finance director; Lauren Hitt, communications director; John Schueler, digital director; Brendan Koch, deputy finance director; and Nolan Varee, New Hampshire political director are all moving on, decisions they all confirmed to ABC News, which was the first to report the departures of Schueler and Varee.The news comes on the heels of the first Democratic debate, at which the former Colorado governor’s middling bid wasn’t re-energized as was that of several key rivals. Polls after the debate said he failed to stand out on a crowded stage even after weeks of volleyed barbs with Sen. Bernie Sanders, I-Vt., over socialism.Perhaps more important, this shakeup comes the day after the close of second-quarter for campaign fundraising, making it especially telling that Hickenlooper’s finance director is among those on their way out.Hickenlooper responded to the staff shakeup on MSNBC Tuesday — struggling to find an answer.”Well, we thought it was time to make a change. You know, these campaigns are long, hard campaigns. You don’t always get it right with the first team. It’s a little bit — you know, I used to be in the restaurant business and it’s a little bit like putting a restaurant together. Sometimes you don’t quite get the right team at the right time,” Hickenlooper said.However, sources familiar with the situation advise ABC News that this was definitely less a “we,” more a “they” farewell.Hickenlooper’s senior team urged him last month to withdraw from the 2020 race and pursue other opportunities, such as a Senate run, a source familiar with the situation has confirmed to ABC News.They sat him down a week or two after the Democratic National Committee requirements for September came out.”We said look, the odds are very slim that we will hit the 130,000 donor mark,” the source told ABC News.They confirmed that fundraising has really slowed — only raising a little more than $1 million in the second quarter. The campaign only has about 13,000 donors, making it near-impossible to qualify for the September debate.”The reality is we’re running out of runway, we will be out of money by the end of August,” the source said staff said to Hickenlooper. “So unless you have a really big moment in the June or July debate, the campaign will be over. So we can hard charge at this thing through July — but on a parallel track, we should be thinking about next steps.”The source told ABC News that in that meeting, the team told Hickenlooper that they would stand by him if he wanted to continue, but wanted to avoid a slow march towards the last 10 cents.But the former governor was not to be deterred.”He really believes he can still pull this thing off, and he wanted to surround himself with people who really believed in him,” the source said.The source told ABC News that the majority of the members now leaving were on their own initiative, “the others he initiated — but I think they were grateful.”ABC News reports that Sorenson will be moving to former Rep. Beto O’Rourke’s team as national finance director.After Hitt told ABC News that “for personal and professional reasons, it made sense to be in Texas” for Sorenson, she confirmed she’d also be “transitioning out” very soon.The other departing aides may be weighing offers from other campaigns, although it’s unlikely they’ll be following Sorenson en masse to O’Rourke’s, sources told ABC News.The trail ahead now grows rockier for the Hickenlooper team as Brendan Koch, deputy finance director, has also left, two sources confirm to ABC News.Sources close to the Hickenlooper campaign staff said this shakeup may be a “Hail Mary” pass, especially in the buildup to the next round of debates, a characterization with which departing aides didn’t disagree.The campaign also just announced it’s hired M.E. Smith as campaign manager to replace Komar, who helped run Hickenlooper’s 2014 gubernatorial campaign.Serving two terms as governor of Colorado, including during the 2012 Aurora theater shooting, Hickenlooper touted a record of getting progressive things done in a purple state and boasted more moderate positions compared with much of a left-leaning 2020 field.Hickenlooper has pledged to stay in the race for the long haul, standing tall for “all we believe in” and standing up “against all that divides us.”As criteria for winning a spot on the debate stage ratchets up — along with the competition — it’s now an open question who remains standing alongside the former governor.”(When you’re getting) one percent you only get one or two swings at this and he missed on those opportunities. For those guys who don’t come in with a lot of money it all rests on their shoulders … but I think he wants to take this thing to the bitter bitter end,” the source told ABC News. “And he has an idea he can make that difference.”Copyright © 2019, ABC Radio. All rights reserved.