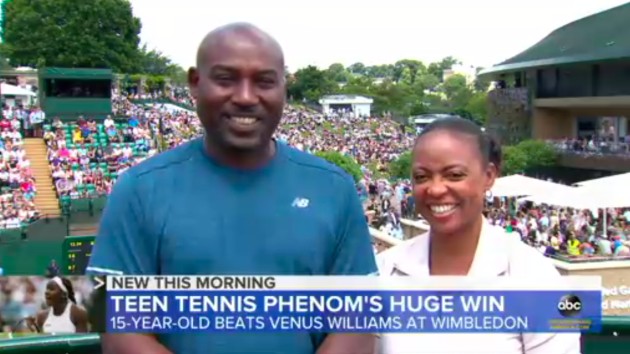 (LONDON) — Proud parents Corey and Candi Gauff watched their 15-year-old daughter, Cori “Coco” Gauff, defeat her tennis idol Venus Williams at Wimbledon on Monday, saying it was the Williams family who “paved the way” for girls like their daughter to have success in the sport.The Gauffs told Good Morning America that having Venus and Serena Williams as examples helped shape Cori’s confidence and love of tennis.”We hadn’t seen many African-American women in the sport, so when they started winning and having success and trailblazing, some of the challenges that they went through made it a lot easier to get into the sport and it allowed us to be a lot more confident about choosing [tennis],” Corey Gauff said.Before Cori was even born, Williams had already won two of her Wimbledon titles.”She fell in love with tennis,” her dad said.Candi Gauff also drew a comparison of the bond between the Williams sisters and their dad.”I really like the relationship between the father and daughter — that’s one of the things I see that Coco does with her dad and it’s a great relationship that is bonding and I just love it,” she said.Before her impressive performance on the grass, Cori said in a pre-match interview that she has “been dreaming to share the court with Venus.”Cori, who is the youngest player in the Open era to advance at Wimbledon through qualifying, is currently ranked No. 313 in the world and was able to defeat No. 44 ranked Williams in straight sets, 6-4.Her mom said she has been working on her composure and ability to focus “for a long time,” which helped her notch the win against the seven-time Grand Slam singles champion.”It finally has clicked in with her that if you just take one point at a time, one stroke at a time, one game at a time and just focus, breathe, move around and everything will come together,” Candi Gauff said. “And it just came together.”Immediately after the winning point against the living legend, the 15-year-old tennis player bent her knees, put her hands on her head and became overwhelmed with emotion.The teen said she is “literally living my dream right now,” adding that she “never thought I would get this far.”Even her dad’s excitement was on full display in the stands of the All England Lawn Tennis and Croquet Club when she clinched the match on Monday.”She saw me overreact by jumping up and throwing my hands up,” he said laughing. “So I was pretty excited.”Her dad added that Cori’s “doing great” and already has her sights set on the competition ahead.”She’s resting, sleeping in and getting ready to go to practice in a little bit to get ready for her next match,” he said. “She celebrated and wanted to get ready for the next match. See still has work to do and she’s got big goals so she’s gonna go after them.”Her mom said she knew right away her daughter was “destined” for big things.Candi Gauff recalled a time at her niece’s track practice when Cori “got up out of her stroller and just started running.””The problem was she kept on running and kept on running,” her mom said. “But her determination was there, and I saw at an early age that she was destined to be something.”Gauff will face Magdaléna Rybáriková in the second round on July 3.Williams’ sister, Serena Williams, ranked No. 11, plays in her first round match today.

Watch their interview with GMA below: